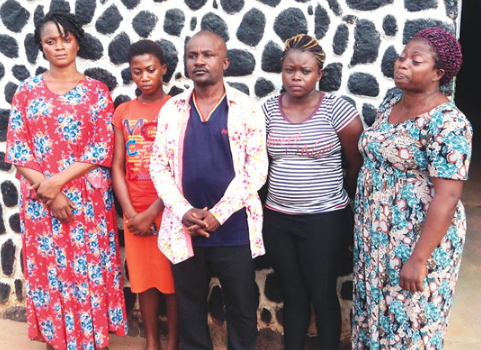 Five members of a false miracle syndicate arrested in Enugu last week have finally revealed their modes of operation.

During interrogation, the suspects reportedly told police their job was to draw more members to unnamed churches and ministries across the country.

One of the five suspects caught at Holy Ghost Park in Enugu over the weekend said they were kept in a house at Onitsha, Anambra State from where they usually move to various states of the country to confirm certain prophecy.

Uchechi Peter said they can be detailed to go to any state but the number of the link man in the said church/ministry is usually provided to them for easy connection on arrival and that they usually dialogue with the link man to the pastor of the church/ministry on the shape the job will take.

“She went ahead to reveal that they usually state their names, nature of problem they had and other necessary information which would be given to the pastor of the church/ ministry for his guidance and during the prophetic hours, she would be among the people with the said problem that would come out.

“The pastor, using the said information, would prophesy that she would be touched and she would fall and the pastor would proclaim the problem is all over and that she has received her healing.

That way, members of the congregation would believe that the pastor is powerful and is a man of God. This would attract more members to the church.”

“Some pastors use us to grow their churches or ministries.

We are paid later through our coordinator; depending our roles.”

On his part, Obi, one of the suspects, said he worked hand in hand with the coordinator and he was the link the between other suspects and Abakiliki /Enugu job.

Obi claimed he joined the lucrative job after his business collapsed because of the activities of fraudsters in Lagos and then decided to relocate to Onitsha where he started to recruit candidates for false miracles.