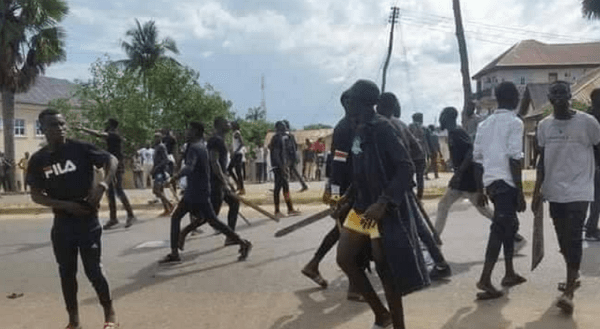 At least 22 persons are feared killed in fresh attacks between ethnic Jukun and Tiv communities of Wukari local government area in southern Taraba State, residents and local officials have said.

The two communities have been at war in the last three weeks, resulting in the loss of lives and property. Witnesses said a Tiv militia stormed Wukari’s suburbs Friday evening.

Online newspaper, Premium Times quoted a resident, Bwacha David, as saying the attackers who were over 200 caught the villagers unaware.

Mr David said the attackers set many houses on fire. ‘’They killed more than 10 persons and burnt many houses,” he said.

According to the chairman of the local government, Adi Daniel, who confirmed the attack;

“We just woke up with another fresh attack by suspected Tiv militias who struck at the suburbs of Wukari.

We are being provoked now to retaliate because we cannot keep silent while people continue to attack us. This is the eighth attack on us by Tiv militias in the recent time.

Over 22 people were killed and we didn’t kill even an insect.

“On Monday, the Deputy Governors of Taraba and Benue met together with the Aku Uka and Tor Tiv. The political and traditional leaders sued for peace. Unfortunately, in the wee hours of Tuesday, Vaase, a border town was attacked and more than seven people were killed again. On the night of Wednesday, Tse Kaakigh village was completely razed. The security agencies visited the place to assess the level of destruction.

“Last night, Ikyaior village came under attack. In all these attacks, it was claimed the Fulani were the ones attacking the Tiv. We are confused. Just yesterday, they (Jukuns) killed a nursing mother at the suburb of Wukari and we are being pushed to the wall. The Federal Government should urgently step in to restore peace,’’ he said.

Police spokesperson in the state, David Misal, confirmed the attacks but could not give details. “I was called by some residents and informed me about the attack. But I am yet to be briefed by the DPO or area command, so I cannot speak on the casualties, and presently I am in church for Easter,” Mr Misal said.