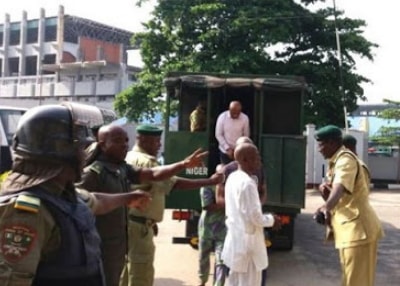 Kidnap suspect Chukwudumeme Onwuamadike has lamented the ill treatment he is getting at Kirikiri Maximum Prison in Lagos.

The kidnap gang leader who was placed in detention last year broke down in tears today during his trial at an High Court in Igbosere Lagos.

He told the court that he is being maltreated and starved of good food.

Here is what he told the court today:

“What have I done to you people, they have been beating me? No good food. I have been locked up in one place since August 30. Why are they taking my case personal?. Let me face my trial alive, why do you people want to kill me?”

Before breaking down in court, another drama ensued while he was about to be brought in to court.

The kidnap kingpin refused to come down from the prison van until Justice Akintoye Adedayo ordered prison officials to take him down by force.