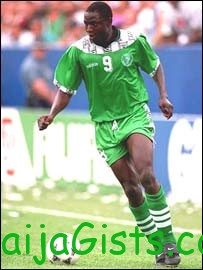 According to his family sources, Rashidi died after a brief illness and his burial is set for today Saturday May 5th, 2012 in his hometown of Offa in Kwara State, Nigeria. 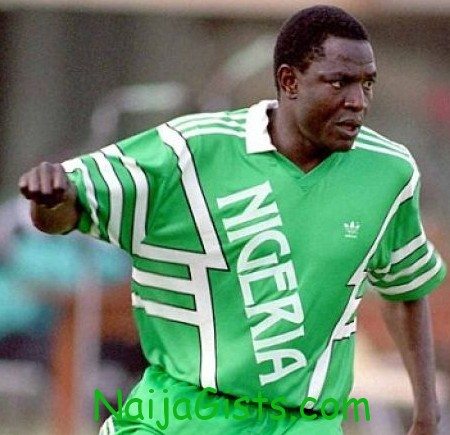 He was born on the 23rd of October, year 1963 in Kaduna was a Nigerian retired footballer who played as a striker. He scored Nigeria’s first goal in a FIFA World Cup.

After starting his professional career in the Nigerian league, he moved to Côte d’Ivoire to play for Africa Sports National.

From there he went to Portugal and Vitória de Setúbal, where he experienced his most memorable years, eventually becoming the Portuguese first division’s top scorer, in 1993–94, as his performances (32 matches, 34 goals) earned him the title of African Footballer of the Year in 1993, the first ever from the nation.

In the 1994 summer, Yekini was bought by Olympiacos FC, but did not get along with teammates and left. His career never really got back on track, not even upon a return to Setúbal, which happened after another unassuming spell, in La Liga with Sporting de Gijón.

In 2003, at 39, he returned to the Nigerian championship with Julius Berger FC..

Yekini scored 37 goals for Nigeria’s national side in 58 appearances,

He was the national record goalscorer. He was part of the team that participated in the 1994 FIFA World Cup (where he scored Nigeria’s first-ever goal in a World Cup, in a 3–0 win against Bulgaria) and the 1998 World Cup in the United States Of America.

Additionally, Yekini also helped the Super Eagles win the 1994 Africa Cup of Nations, where he also topped the goal charts, and participated at Olympic level, in Seoul 1988.

Rashidi Yekini will be greatly missed.