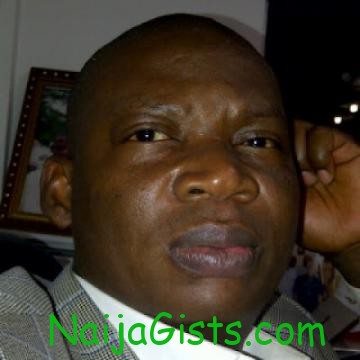 He was assassinated by an unknown gunmen at his residence located at 65, 2nd Ugbor Road, GRA, Benin City on Thursday May 3rd, 2012.

“Last week, they succeed in killing three journalists. Last night, they killed Olaitan. Let me be clear they cannot kill my fighting spirit. We submitted a petition to the Commissioner of Police in which we informed him of the meetings held at the residence of the godfather where they took a critical evaluation of the forthcoming election and they agreed it is impossible for them to win,” Oshiomhole said.

He further alleged that the opposition also resolved at the meeting to intimidate his person and if possible, eliminate him.

“At that meeting, they said they will kill under the guise of armed robbery, many of my personal staff and key leaders to pretend as if they are victims of kidnapping. I was also informed that they resolved that weeks before the election, they will detonate bombs in parts of the state in order scare people away from going to vote.

“What is our crime? Our crime is that we have mobilised our people, we have deployed public resources for the public good and the godfather is angry. We have no apology for the stand we have taken and we will not slow down. The blood of this young men will fire me on to fight and defeat the godfather. There is no going back.

“Last night like cowards, they shot Olaitan in the chest, head and belly to make sure he never survives. Why will a man in his eighties seat over the death of young children? Why will an old man who has children and grand children supervise the killings of young people?” Oshiomhole asked.

The Governor said the murder of Olaitan will not stop the flag-off of his re-election campaign slated for Saturday as was the case last Saturday when the campaign flag-off was postponed after the accident that involved his convoy claimed the lives of three journalists.

A press statement issued and signed by the State Chairman of NMA, Dr. Philip Ugbodaga, described the killing of the governor’s aide in the early hours of Friday as “wicked ungodly, reprehensible, and condemnable. We are sad at this incident as this accentuates the worsening security situation in Edo state and in the country.”

The NMA Chairman called on the security agencies to do all that is necessary to apprehend the culprits and bring them to book.