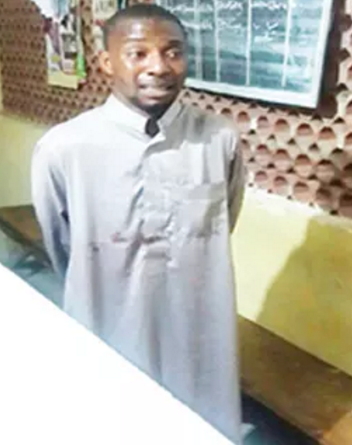 Badoo was almost lynched on Sunday by a mob incensed by his atrocities. After sneaking out of his victim’s house, Badoo would write ‘I’m Badoo’ and paste it on his victim’s door. Badoo on Thursday allegedly raped and killed 27-yearold Mrs. Grace Obinna and her nine-month old baby after the woman struggled with him and did not allow him to clean her private part with his handkerchief. Obinna, a teacher at Methodist Primary School, Ibeshe, was found dead after Badoo allegedly chopped off her chin and plucked out her eyes.

The rapist was discovered to be operating from a lonely uncompleted building in Oke Ota community, Ibeshe, where his operation weapons were found. He was said to have raped about five women including an 85-year-old woman who was presently receiving treatment at an undisclosed hospital.

A resident of the area, who identified herself as Bose, said the rapist and his gang, still at large, started the crime last year. “The community has been troubled with a series of rape and killing perpetuated by this Badoo and his gang since last year. He started at Ilaje, Ibeshe Phase 1, Abule and now Oke Ota community.

Nobody could identify him as a resident when he was arrested and handed over to Oba Ogunsanya Abayomi, the Olu of Ibeshe. The only person that recognised him at Oba’s palace was one of his victims.

He killed and removed his victim’s teeth when she refused the handkerchief. I believe, when they torture him, he will talk.” Another resident, who pleaded anonymity, said Badoo had been operating by the strength and support of godfathers. “He cannot be doing this, if there are no strong people behind him.

We have been trying over the months to catch him to no avail. In order to succeed this time, the community came together, performed some sacrifices, made incantations and went out for him. That was why he was caught,” the resident added.

Badoo was caught at Ilaje roaming about by Ibeshe community youths. They had beaten him to stupor and were about to lynch him when on second thought, they decided to march him to Oba Abayomi.