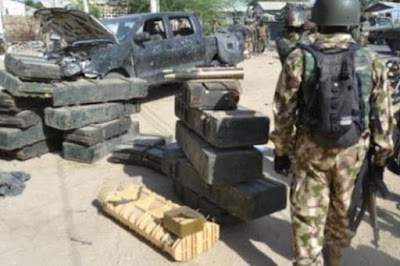 The terrorists, who came through Banki axis of Sambisa Forest, attempted to inflict damage on our troops. But the vigilant soldiers rose to the occasion and dealt decisively with the terrorists by killing six of them. They also recovered 1 Fabrique Nationale (FN) rifle with registration number 167229, two belts of 148 rounds of 7.62mm (NATO) ammunition and 1 FN rifle magazine loaded with 7.62mm ammunition (special). The troops also blew up three vehicles laden with Improvised Explosives Device (IEDs).

Sadly, 5 soldiers sustained injuries during the attack. They are currently receiving treatment.

Prostitute Weeps As Man Who Promised To Marry Her Disappeared With N580K In Ajegunle Lagos
EXPOSED: Ikorodu Lagos Serial Rapist, Badoo Is A Ritual Killer