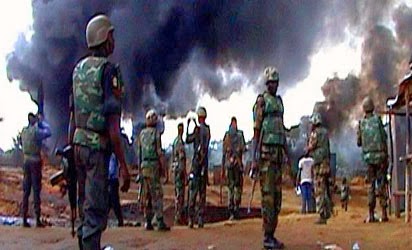 Firstly, we would like to thank everyone for the support pouring in, in response to our calls for assistance and contributions towards the obligatory mission to free our 200 abducted daughters. The promises from so many blessed youth, to head to the conflict zone and join the effort to rescue our girls and sack the terrorists out of their comfortable camps, is beyond words. May the Almighty protect and reward you in the ways that He only can.

Nigerians and the world must know what the true situation in Sambisa and other forests in Borno is. It was in the media that the families who ventured in pursuit of their daughters turned back when they approached the terrorist camps. The media reported that what they saw, was “serious,” but they will not say it for security concerns. We are obligated to reveal what they saw.

From the credible participants we spoke to, the camps are real and live. The civilians actually reached the Boko Haram camps in Sambisa four days ago. The mission was led by the army division in Borno, who were in the front, while the civilians followed behind.

Upon reaching the periphery of the camp and realizing the threat they faced, the civilians were advised to turn back. When they asked if the military would engage the terrorists, the army commanders responded, “we were given no such directive.”

Boko Haram camps in Sambisa are not hidden. The terrorists camp in clear sight. The camp seen housed thousands of terrorists and their abducted families, up to 3000 people by conservative estimates. The terrorists were seen walking freely in the camps, living a very normal life. Women were seen in the camps, these included the hundreds of women who have been abducted over the years.

The camps were kitted with generators delivering power to their devices. There were fridges, welding machines and all other household and technical equipments.

Over 100 trampoline tents were seen, in which the terrorists dwell. It is not yet rainy season in Borno, so not much shelter is yet utilized.

We were informed that over 50 vehicles were seen in the Sambisa camp. There were hundreds to thousands of motorcycles.

After the civilians turned back and returned to the metropolis, it was related that the army too came back, evidently having not engaged Boko Haram in any physical way. For them it was just another day, another month in another year, scouting the Boko Haram ‘barracks.’ The situation s the same in other forests like Banki and Buniyadi, according to the credible people we spoke to.

The Desperate State Of Insecurity

With the above registered, the world must recognize that there is evidently a standing accord between Boko Haram and the Nigerian military. The military knows and has always known where they hide in plain sight, but is either not equipped, or not interested in ending their reign of terror.

A recent media report in the Vanguard described how a US-based StrategyPage report presented that Boko Haram terrorists were so wealthy; they had actually bought government and security officials over. The source of Boko Haram funding has never been exposed to the people. The Nigerian government continues to cover this up, protecting the sponsors; thus the four year long reign of unlimited sponsored terror with absolute impunity is far from its end. Like the government, Boko Haram thrives on the explosive state of corruption.

Boko Haram invests way more than Nigeria does in equipping and boosting the morale of its army. Boko Haram is today an institution and a well functioning one that pays top dollar to purchase tentacles at all levels of society. Fear and corruption facilitate its growth in this regard. In contrast, the Nigerian government sabotages its army and underfunds and under-equips them. A latest report by the BBC revealed that Boko Haram pays $3000 to purchase mercenary recruits from neighboring countries like Niger. Increasingly perplexed by the course of the war, Nigerian soldiers have been deserting the army according to several reports and military sources. They are frustrated as they realize there is no honest intention to combat the terrorists whose locations are known and are left to operate freely. Soldiers are approaching activists to volunteer their services in a true battle they believe in, after they leave the Nigerian army.

Nigeria is in trouble! We the people know and realize that this situation must be checked in Yar’Adua style—eliminated in totality. Boko Haram must be starved to desperation in their camps and the terrorists must be engaged and killed without remorse. A similar conflict between Nigeria and Chad in the 80’s had the Nigerian army under then Brigadier Muhammadu Buhari, with the 21st Armored Brigade, cut supplies and starve the Habre Chadian troops, thus retaking the 19 Nigerian islands. The efficiency of the Nigerian army is also fondly recollected in its commanding role in solving the Liberian crises. But today, our army cannot capture Sambisa. They are not engaging Boko Haram with any determination to win by any method whatsoever, under whatever directives they have from Abuja; and now it is way passed time we the people do this for ourselves. We simply have no other choice.

Furthermore, our reliable suppositions were again confirmed today with the arrest of some of the “unknown 100 gunmen,” usually reported as “Fulani herdsmen” who have been ravaging the middle belt since 2012; these men confessed according to the DHQ, to being part of Boko Haram. We have analyzed their mission and operations which have involved the massacre of towns and burning all in sight, as being coincident with the mission of Boko Haram: ultimate goal, the destruction of life in large parts of north Nigeria. If further studied, these “100 men” not only dressed and killed and destroyed just like Boko Haram; but also started off provoking ethnic crises, first attacking “Christians,” and when this failed, they as with the primary Boko Haram now moved to the full massacre of all towns, irrespective of creed or ethnicity. The gunmen arrested and displayed looked anything but Fulani; supporting this realization, in times past, some killed marauders have been described as foreign mercenaries. The chronic misinformation on the mission and identities of these marauders and failure of the government to accost them for a whole three years, suggests a sinister, pervasive plan to purposely provoke deadly ethnic tensions in Nigeria.

Nigeria’s military and security department has taken to lying to cover their wrong actions or inaction. They lied about the number of girls abducted. They made up an imaginary number they claimed they had freed. They lie about how many are killed and how many they kill in millions. The most recent lie was made by the junior minister of defense, Musiliu Obanikoro who said so on Channels TV, Monday, that no helicopters were used to supply terrorists. This is a categorical lie. We have confirmed from numerous sources including released abductees, who described how choppers flew in to the camps and dropped Mr. Biggs snacks, chicken, burgers and things, bought from the Borno metropolis. There is no doubt as to the accuracy of this information.

Apparently there is cooperation with the military and treacherous military cover-up. We the people must act and time is running out. Soon Boko Haram will be too big to contain and then they can over throw not just the north, but the entire nation as has happened and been attempted by terrorists in neighboring nations and across the world. The time to act is now.

It has been four years that this terror has been going on unchecked and distressingly, increasing in amplitude by the day. The bombing of Nyanya was reviewed by Brian Michael Jenkins and Bruce R. Butterworth, the terrorism experts from the Mineta Transportation Institute (MTI), as being the fifth worst episode of such explosives attack in any nation across the entire world since 1970! The abduction of 234 girls is another topper on the list of few similar abductions in recent world history. The president of Nigeria flew in his hoards of private jets first to Ibadan for a birthday party, then to Kano to dance at a pre-legally permitted campaign rally within a day of the attacks, in a show of disconnect from the terror situation and possible uncanny delight. The incompetence and lack of interest of our current administration in handling this epic crises is not debated and not a today topic. The current reality necessitates the response and active action of the people before all hope is lost along with the lives and limbs being blown away.

We are recruiting all support, supplies and volunteers to surround and eliminate Boko Haram in their forest camps. This is a dangerous task, but the Almighty will give us the strength and victory against these enemies of the state, of peace, of man and God.

Time is of the essence. We do not know what these 200 girls are going through, the type of horrific molestation in the hands of these beasts. *God forbid! And not only them, so many of our fellow citizens, mothers, sisters, daughters, brothers, fathers and sons have been trapped with the terrorists for years. It is time for us to do for them what we would want them to do for us, had it been us in the camps or our daughters there.

The parents have vowed to dare again into the forests to rescue their wards. By God’s grace, many of us will go with them. We will also assist them with all the supplies they may need.

We invite a homogeneous response from Muslims, Christians and others alike. The Doctor Amadi (JP), Muslims Against Terror organization, who are deeply involved in this rescue mission, it can be recollected played a vital role in reversing a Boko Haram trend of bombing Churches in 2012 when they released the Communiqué captioned, “Official Communiqué from Muslims Against Terror, Nigeria: Fear None Save Allah. Defend Islam, Defend People, Defend Churches, Defend our Nation.” Many of us read this strong message, and supported by calls of the same from Sheikh Gumi as relayed on SaharaReporters, Boko Haram left Churches alone and declared Muslims their new top enemy; they have since killed numerous Muslim scholars. We are all in this together. [See: https://muslimsagainstterror.com/?p=124] The more we come together, the more frustrated Boko Haram and their evil sponsors become.

Nigeria’s billionaires who exclusively benefit from the corrupt failed system, and whose ill-gotten wealth sponsors our unique terror crises which we now export to neighboring nations and around the world, are nowhere to be found now that we need urgent action and contributions. We the ordinary people have only ourselves. All prayers and all forms of contributions to the desperate people and their urgent missions in Borno go a long way and are urgently needed. Emergencies like this are never planned for or expected. The mothers plan to go back into the forests soon and we hope we will be there with them.

It is touching how many of our youth have decided to volunteer in this divine mission against the terrorists. It is simply humbling. It says a lot about the true purity of spirit and faith of Nigerians, when seen through the murky layers of cabal instituted corruption. These young men setting out for Borno will also need our support for their sustenance in this altruistic mission.