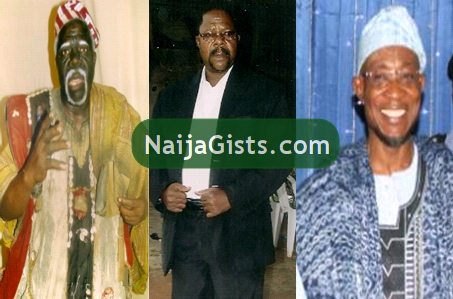 Yoruba actor Ojo Arowosafe aka Fadeyi Olori is currently in a critical health state in hospital after he was allegedly crushed and wounded by Osun State Governor Aregbesola’s convoy on Monday October 15, 2012 right after a rally organized by ACN (Action Congress Of Nigeria) in Ondo state Nigeria.

We learnt Aregbesola’s convoy hit the veteran actor as the Governor was leaving the ACN rally in Akure on Monday.

Fadeyi Oloro who was paid to express support for Rotimi Akeredolu was seriously wounded during the accident.

As at the time of this report, Fadeyi Oloro is still in a critical health state in an hospital in Akure.

He needs your prayer and support at this critical moment.

Stay in touch with NaijaGists.com for update on his condition.

Wole Soyinka: I’m Fortunate To Be Born A Christian
The Metamorphosis Of Stella Oduah: From Mrs. Stella Ogiemwonyi To Stella Oduah