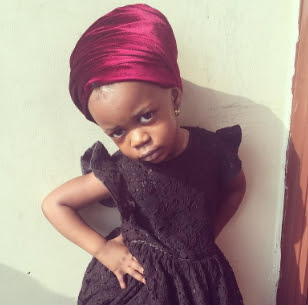 4 days after her abduction, two-year-old Fareeda whose mother Aisha Alli-Balogun Abiose was killed by her abductors, was freed on Monday night.

Little Fareeda and her late mum’s friend were freed and allegedly given transport fare to go back home by the kidnappers.

Fareeda and the expectant mother were said to have been freed after the girl’s father paid an undisclosed ransom.

The kidnappers reportedly took them to a safe location and asked them to go.
They contacted Fareeda’s father and told him where to pick up his daughter, but later changed their method.

A source said the victims were freed around 8pm on Monday, adding that the expectant mother was handed the fare.

“The family does not want to speak with anyone because they are unhappy; nothing was done before now by all institutions contacted. Why now? This shows how messy the government is and how they failed the entire nation.

“The only thing you can help us with is passing the message to show how the government and police failed us by not showing concern. Not even a single call. Thanks to God. What if the father couldn’t raise the money?

“The girl’s father said the government and the police failed them. That not even a phone call was put across to the family and they didn’t show any concern. He said he doesn’t want the police to start worrying him on how and where they picked the daughter.”

Continue Reading
You may also like...
Related Topics:fareeda, kidnappers, released