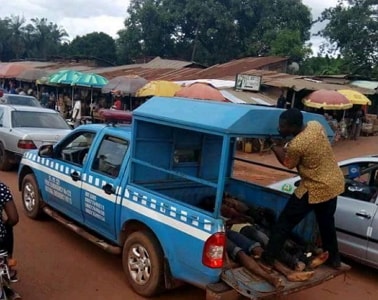 A granite-filled truck has rammed into a passenger bus at the Abule – Ika stretch of the Abeokuta – Ibadan road, crushing five people to death and gravely injuring 14 others as it locked into the mangled bus.

It was learnt further that the truck driver in bids to avoid potholes – ridden portion of the Abeokuta – Ibadan road at the Abule – Ika corridor, lost control of the wheel, ploughed into the lane of the incoming Mazda bus and rammed into it.

Witnesses said Operatives of the Federal Road Safety Corps (FRSC), Ogun State Command and the Ogun State Traffic Compliance and Enforcement Corps(TRACE) who arrived some minutes after, were sighted battling to untangle the wreckage and rescue victims.

Also, the Route Commander, Florence Okpe, Public Education Officer, FRSC, Ogun State Command, who confirmed the accident in a message to The Nation, attributed the cause to “dangerous driving.”

Okpe stated that 19 people – 14males and five females were involved in the accident, adding that while five people died, 14 others were injured as the “truck crushed the passengers in the commuter bus and trapped them inside.”

According to her, the injured were rescued to the Federal Medical Centre(FMC), Abeokuta, while the remains of the dead were deposited at the morgue of the General Hospital Ijaye, Abeokuta.

The FRSC Ogun State Sector Commander, Clement Oladele, commiserated with the families of the victims and cautioned drivers against driving dangerously to avoid road traffic crashes.

Funke Olakunrin’s Last Moment…. How She Was Killed By Gunmen At Old Ore Toll Gate On Ore-Benin Expressway
Criminal Gang Using Family Members For Rituals Confess “The Devil Deceived Us”