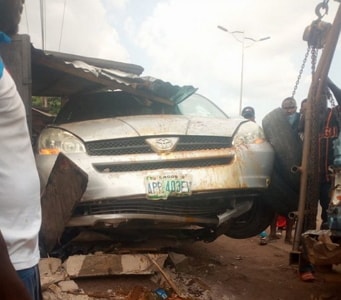 The FRSC in Kano, confirmed that 12 people died in a ghastly auto crash on Wudil- Maiduguri road, in Gaya Local Government area of the State.
According to the Public Relations Officer of the Kano Sector Command of (FRSC), Kabiru Daura, 26 people were injured, comprising 19 male and five female adults.

He said two vehicles, a Volkswagen Golf and a Hiace (Hummer) bus, with registration Number BBR 690 AA and KTG 467 YG, all commercial vehicles were heading from Azare to Kano, Kano-Maiduguri with 38 passengers on board the vehicles.

According to an eyewitness account, the accident occurred at Tsaida village, near Gaya town, in Gaya Local Government Area of Kano state, at about 11:20 am.

The FRSC spokesman said the corpse of the victims and those, who sustained injuries have been rushed to Gaya General Hospital.

He said: ”The LG has already rendered support to the victims through treatment.”

Continue Reading
You may also like...
Related Topics:accident, fatal, kano