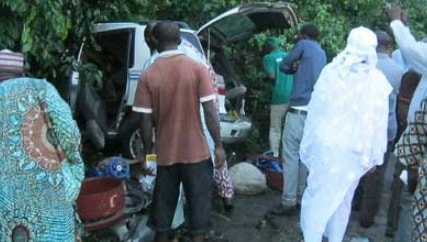 The Federal Road Safety Commission ( FRSC ) in Zamfara has confirmed the death of 10 persons in Sunday’s late evening auto-crash in the state.

Confirming the incident, the Public Relations Officer of the command, Nasiru Ahmed, said the incident occurred on the Sokoto-Gusau road and involved a head-on collision between a Golf car and a truck.

The accident, he said, was due to over-speeding and loss of control on both sides.

He urged drivers to avoid night journeys as a way of reducing crashes on the roads.

Continue Reading
You may also like...
Related Topics:accident, fatal, Zamfara