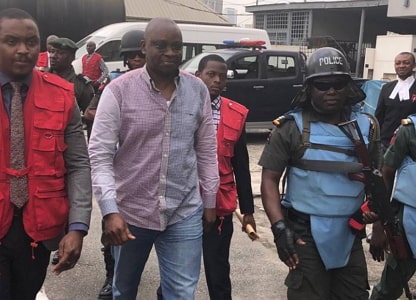 Ekiti state man of the people, the smart politician who lured the great people of Ekiti state with stomach infrastructure and held on to their salaries has been arraigned.

Ayodele Fayose, the untouchable Peter The Rock saw the other side of life today during his arraignment at the Federal High Court in Lagos.

The EFCC arraigned him on 11-court charge bordering on abuse of office.

When the charges were read to him, the governor who appeared calm and collected pleaded not guilty.

His lawyer, Kanu Agabi later filed a bail application on his client’s behalf but it was rejected by the Presiding judge who ordered that Fayose should remain in EFCC custody till Wednesday the 24th of October 2018.