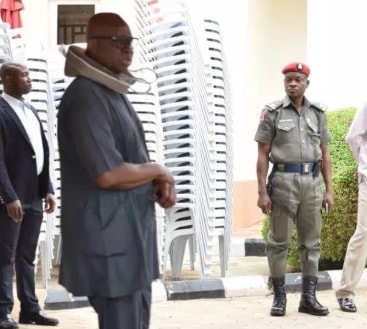 The outgoing Governor of Ekiti state today appeared in public since his deputy Olusola Kolapo lost the governorship election to former Governor Kayode Fayemi who ran on the APC platform on Saturday.

Fayose today visited the Ewi of Ado-Ekiti, Oba Rufus Adeyemo Adejugbe, on Thursday at his palace where he alleged that he and his supporters were still being persecuted by the Federal Government after losing election on Saturday.

The governor alleged that his security aides who were withdrawn on the eve of the election are yet to be restored, a situation he said has exposed him to danger.

He also claimed that about 400 PDP members are still being detained saying harassing him is not in the interest of democracy.

Fayose further told the Ewi that the Government House was invaded by security forces and his wife prevented from gaining access to their official residence after election on Saturday.

The governor urged the Ewi and other traditional rulers to intervene and save him from further punishment by the Federal Government as his mandate expires on October 15.

“I have come to officially tell your sir, as the Paramount Ruler of Ado-Ekiti, the state capital, that the Government House was invaded by the police.

“Over 400 of our members are being detained as we speak now. After the poll on Saturday, my wife was prevented from entering the Government House for about 45 minutes.”

“Since last Wednesday, security agents had laid siege to the Government House, and were subjecting people to untold hardship coming in or going out.”

“The poll has come and gone irrespective of what we went through. The constitution says I am still the governor till October 16 this year. Our state radio and television stations have been shut down. And there has been no means of getting across to our people.”

“It was only this morning that security agents at the entrance of the Government House were withdrawn. If we have been robbed I still have a right to life and my family has a right to life too.”

“The man that won has three units of the police protecting him. All my security men have been withdrawn since last Wednesday. I am only left with just a few.”

“Harassing me is not on the interest of democracy. People must intervene before things go out of hand. I don’t know why we should be in this situation in 2018.”

The Ewi sympathized with Fayose and promised that the traditional rulers would intervene and make representations to the appropriate authorities.

While thanking God that nobody died during the election, the royal father appealed to the relevant security agencies to restore Fayose’s security aides to him.

“As if we knew, monarchs arranged many meetings before the election and pleaded with everybody that before, during and after the poll, we don’t want any trouble.

“We said then that whoever wins, there should be no problem. The way I see you, I know something is happening. You rarely wear this type of dress to the palace.

“I will convey your message to the Oloye of Oye-Ekiti, who is the Chairman of the Ekiti State Council of Traditional Rulers and we spoke this morning and we were worried about your whereabouts.

“I appeal to security agencies that they should restore your personnel to you as the sitting governor. As Ekiti leaders, we will intervene.

You, Fayemi and Eleka are our sons. Peace must be allowed to reign. We need peace in our state.”

Continue Reading
You may also like...
Related Topics:aides, fayose, Security