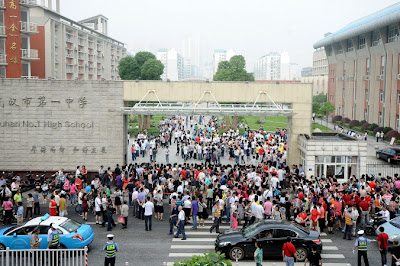 The “silent admission” guidelines require senior students taking the “gaokao” to go without bras and belts, and wear plastic sandals to avoid triggering the alarm on the metal-detecting equipment. Those with metal fillings or implants will need a doctor’s letter.

Netizens have criticized the security checks as too harsh, and some students are unhappy about being treated like “goods,” according to Beijing News.

One examinee told the newspaper: “I feel like we are a group of animals, ready for the market.”

Nearly 10 million students nationwide will compete for less than 7 million places available at colleges and universities.

The new checks are aimed at preventing cheating. More than 4,000 devices have already been seized during an anti-cheating campaign in Jilin.

The pressure to get into college can lead to breakdowns and suicides in the run-up to the exam, and has also encouraged many to resort to cheating.