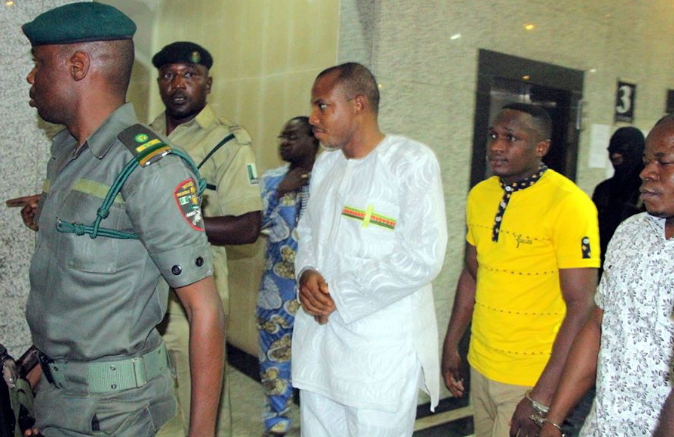 The FG today  in Abuja re-arraigned Nnamdi Kanu, leader of the Indigenous People of Biafra (IPOD) on an amended 11-count charge bordering on terrorism, treasonable felony and publication of defamatory matter.

Kanu, along with Chidiebere Onwudiwe, Benjamin Madubugwu and David Nwawuisi, were re-arraigned before Justice Binta Nyako of the Federal High Court, Abuja and they pleaded not guilty to the amended charges.

Nyako fixed Nov. 17 to hear the bail applications filed by counsel to all the defendants.
Nwawuisi, who is the 4the defendant, was added in the amended 11-count charge, as he had not been previously charged with the other three in the earlier six-count charge.

In the amended charge, in count one, all four defendants were accused of conspiracy to commit treasonable felony, contrary to Section 516 of the Criminal Code Act.
In count three, they allegedly managed an unlawful society, while count eight borders on possession of unlawful firearms and count 11 hinges on acts of terrorism.

They allegedly committed the offences in Nigeria and London between 2014 and 2015.
Counsel to the defendants, Chief Chucks Muoma (SAN), Mr Inalegwu Adoga, Mr E.I Esene and Mr Maxwell Okpara, complained to the judge that the prosecution was bent on frustrating the case by employing unnecessary delay tactics.

Nyako would be the third judge handling the case against the IPOB leader.
The first judge that handled Kanu’s matter was Magistrate Shuaibu Usman of Wuse Zone 2, Magistrates’ Court, Abuja.

Usman squashed all the charges against Kanu after the Prosecutor, the Department of State Services (DSS) filed a motion challenging the court’s jurisdiction to hear the matter.

The case was later filed in the Federal High Court, Abuja, where it was assigned to Justice Adeniyi Ademola.
Kanu, however, during one of sittings told the court that he was no longer confident in the court saying he got information that he would not receive a fair hearing.

The case file was then returned to the Chief Judge of the Federal High Court, Justice Ibrahim Auta who reassigned it to Justice John Tsoho.

However, following an alleged conflicting ruling giving on the issue of secret trial in favour of the DSS, Kanu in a petition asked the National Judicial Council (NJC) to investigate Tsoho.

He also filed an application asking the judge to disqualify himself from the matter.
Tsoho then hands off the matter on Sept. 26 and sent the case file to Auta, who reassigned it to Nyako.