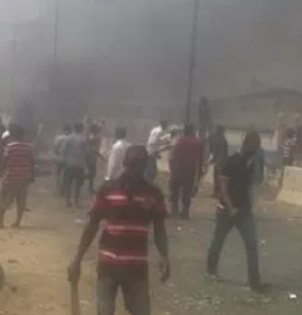 If not for the timely intervention of the Nigerian Army and Police, a bloody ethnic clash would have erupted in Akure, Ondo State, last Tuesday. Also, the proactive measures taken by the state government and the Deji of Akure, Oba Aladetoyinbo Ogunlade, helped in preventing bloodshed and wanton destruction of properties.

However, a middle-aged woman, Mama Lekan, lost her life in the incident, while vehicles, motorcycles and shops were razed by the irate youths involved in the clash.

Tension had enveloped the town on the fateful day as a result of the invasion of Sabo Market predominantly occupied by Hausa by masqueraders who are of the Yoruba extraction. Hausa living in the area had resisted the masqueraders, a situation which did not go down well with the Yoruba youths. Two houses, four vehicles and 10 motorcycles were reportedly set on fire during the clash. 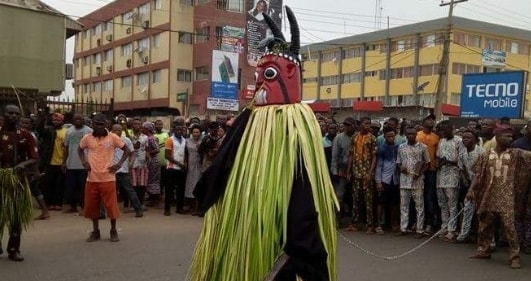 Sources said the crisis was caused by an attempt by a cart-pushing Hausa man to pass through the midst of the traditional worshippers: “The fight was avoidable. We have been living with the Hausa people for years. They are conversant with our culture and traditions.

“The Egungun Usopo festival requires that people should keep off the street for the short period it lasts. But this Hausa man defied the traditional worshippers andwanted to pass through their midst, prompting the masquerade to flog him. But some of his people came out and fought the masquerade. They removed his mask. That was the cause of the problem.”

The community had earlier gone on air to announce that the festival would hold and directed residents living in the area to keep off the streets during the period.

The Elemon of Akure, Chief Olusegun Adedipe, hinted that Ogunlade Aladetoyinbo made efforts to douse the tension. He said the Hausa and Yoruba people have over the years been living peacefully, adding that the clash was strange:

“We have a history of tolerance and accommodation in Akure. Our people live harmoniously with people from different parts of the country and we all live together peacefully without rancour. The clash was strange to us as this has never happened in the history of AKure, a town known for peace.”

As a result of the development, police set up an investigative team to apprehend the masterminds of the attack. Commissioner of Police, Mr. Gbenga Adeyanju, stated that police have already begun manhunt for the perpetrators of the clash. He spoke through his Police Public Relations Officer (PPRO), Mr. Femi Joseph, assuring that the masterminds of the clash would be apprehended in no distant time and brought to justice:

“We have not been able to arrest any individual in connection with the incident. In fact, no body has been linked with it, because the clash happened very late in the night and that prevented people from volunteering information to the police.”

However, he said peace has returned to the town, urging residents to continue with their lawful businesses and remain calm till the police conclude their findings. However, government condemned the incident, warning that it would not tolerate a repeat of it in any part of the state. Commissioner for Information and Orientation, Mr. Yemi Olowolabi, said:

“The state government wishes to inform the good people of Ondo State that peace and normalcy have been returned to the area, while the police and other security agencies are working to ensure peace in all parts of the state.

“Government also wishes to advise the people, irrespective of tribe or religion, to go about their businesses without any fear of attack or molestation. Government, therefore, wishes to state that this administration is seriously working to prevent a recurrence of the incident, while urging that all must resist attempts by disgruntled elements to foment trouble in any part of the state.

“The administration of Governor Oluwarotimi Akeredolu wishes to advise the people of the state to always report their grievances to their community leaders, the police and other relevant authorities for a peaceful resolution, rather than taking the law into their own hands.” Oba Ogunlade visited the scene of the clash in company of some high chiefs. HE warned his people not to make life difficult for the Hausa while also warning the Hausa against violence. The monarch promised to call a meeting of all the groups involved and meet with the state government to ensure that the peace being enjoyed in the state continues.

Continue Reading
You may also like...
Related Topics:beat, Masquerade, unmasked