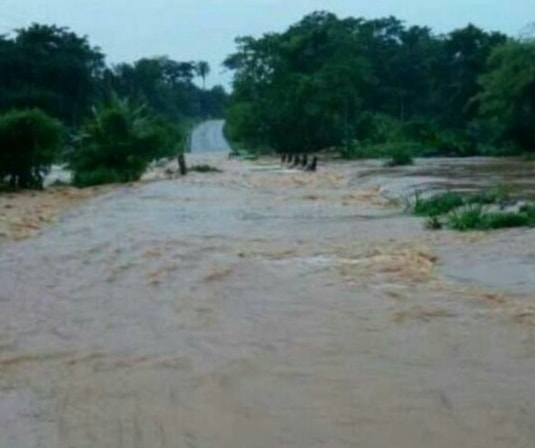 Three persons, including a pregnant woman, have been killed by flood that swept through some parts of Zinariya community in Jos, the News Agency of Nigeria (NAN), reports.

The flood, which resulted from days of downpour, also brought down nine houses pulled down.

“The incident resulted from narrow waterways; the victims were asleep when the rain started, but with the water soaking up foundations of their buildings, the structures collapsed on them,” Sani Bello, a relation of the victims, told NAN on Thursday.

According to him, the water washed the bodies of the three deceased away.

“My pregnant elder sister, who was on a visit from Naraguta, a nearby community, was among the people washed away by the flood.

“We have found her body and buried it. There is also a lady with a broken leg who has been taken to the hospital.

“Another victim, one Ibrahim, who is seven years old, also sustained injuries and has been taken to the hospital,” he said.

Meanwhile, Sen. Istifanus Gyang (PDP/Plateau North), has visited the area to commiserate with the people.

Gyang, who was represented by an aide, Daniel Dem, promised to assist the area with resources to rebuild their homes and map out waterways.

He also offered financial assistance to the affected families and urged the community to stop building houses along waterways so as to avoid a recurrence.

The Ward Head of the community, Mallam Yahaya Abubakar, who received the items, commended the Senator for his show of concern.

“You are the first government official to come to the aid of my community. May God continue to bless you for this kindness,” he said.

He regretted the damage caused by perennial flooding in the area, and urged government to take urgent measures to mitigate that.

One of the beneficiaries of Gyang’s gesture, Malam Mohammed Kamilu, while appreciating the kindness, said that the money would be of great assistance to the victims.

“Some of the victims lost practically everything. This assistance will help them to restart life all over again,” he said.