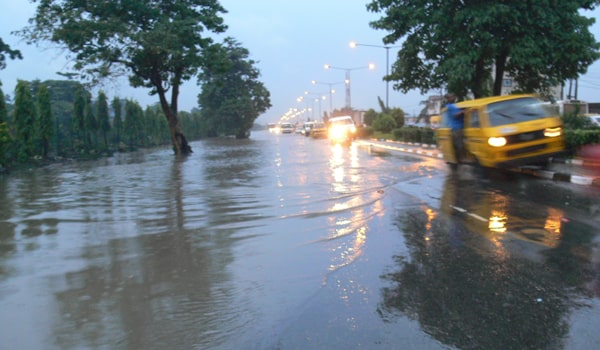 6 Killed In Lagos As The Skies Opened Up In Fury

For many residents of the Sunshine state, it was a day to forget.

Killed were Mrs. Jumiah Utache and her children Faith (9 years), Domino (2)and Daniel (1) at Magodo area of Lagos, as well as an unidentified 11-year-old boy and one Wasiu, who was trying to rescue him from flood, at Aboru in Alimosho Local Government Area of Lagos.

The Utaches died after a hilltop structure crashed on their house at 48, Orisa Street, Magodo Phase One, Isheri Waterfront, during the downpour.

Residents said the hilltop structure on Otun Araromi Street collapsed and fell on the Utache family residence, crushing the woman and her children who were asleep.

The head of the family, identified as Emmanuel Utache, was injured.

No loss of life was reported at second building collapse on Rademo Street, Ita Elewa, Ikorodu.

It is an old one storey structure of mud bricks.

He said the agency had recommended full implementation of the existing law on collapsed building in the state which included seizure of the affected property.

He said: “The law does not only stipulate removal of debris after rescue but includes seizure of such property for constituting risk to other residents within the immediate environment and those close to the building as at time of the incident.

“Investigations revealed that aside the heavy downpour, the obviously old building constructed with mud bricks, had been seriously distressed over time with visible cracks on its other yet-to-collapse sides.

“In order to avert danger to adjoining buildings and other users of the environment, LASEMA has recommended strongly that its remains be pulled down, the debris removed and the property forfeited to the Lagos State Government as stipulated by law.”

The News Agency of Nigeria (NAN) also reported that an unidentified 11-year-old boy and one Wasiu, who was trying to rescue him, were swept away by flood at Aboru in Alimosho Local Government Area of the state in the aftermath of the down pour.

It said two young boys who were sent by their parents to buy cooking gas unknowingly fell into a drain through which water passed into the canal.

“Three young men attempted rescuing the boys and succeeded in rescuing the older one, but one of the rescuers popularly known as Wasiu Stubborn was swept away while trying to rescue the other victim,” NAN quoted a source as saying.

It also quoted a community leader in the area, Solomon Agboghoroma, as saying: “This rain started almost four or five days ago but the one of last night was one of the heaviest and it started at about 2:15 am and by 3:15am, it came with full force and everywhere was flooded.

“At about 7:30 am or 8:00am, we learnt that an OPC member, who was a security guard in one of the gas stations here was carried away by flood while trying to rescue two children who came to buy gas but fell into the drain.

Read Also: Man dies in Lagos flood
“The gas station had not opened because of the flood as the whole place including the canal had overflowed its banks.

“The children misplaced their legs and the two of them fell inside the gutter. This OPC boy went and rescued one but in the process of rescuing the second child, he and the boy fell into the canal and that was the end.”

He blamed the government for the tragedy, saying that several petitions had been written to successive governments in the state from the time of former Governor Babatunde Fashola to the Akinwunmi Ambode administration.

“People have been dying in situations like this here and all landlords have tried, including raising almost N4 million for dredging of the canal,” he said.

“The government knows what to do when it is ready because this canal contract was award sometime in 2011 or 2012. When we taxed ourselves, Fashola came and commended us and promised palliative and government takeover.

Suleiman Adedokun, an eye witness and a shop owner beside the canal, said that the rescuer, named Wasiu Stubborn, entered the drain to rescue the boy but the flood swept both of them away into the canal.

“Wasiu tried, succeeded in catching the second boy but his effort to come out of the drain proved futile as it was not easy for him due to the force of the water,” Adedokun said.

“It is the bad road and narrow culvert that caused these deaths because these two children that fell inside the drain didn’t know it was there as water covered everywhere.”

An officer of the Lagos State Neighborhood Safety Corps (LSNC), who spoke on condition of anonymity, said that the agency got the information at about 9:00 am that flood carried away one Mr Wasiu a.k.a Stubborn while trying to rescue two children.