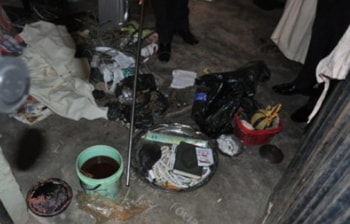 Kwara command of the NSCDC (The Nigeria Security and Civil Defense Corps) today, said it had uncovered a shrine used by some suspected fraudsters to dupe residents of the state.

The Commandant of NSCDC in the state, Mr Adeyinka Ayinla, made the disclosure in an interview with our correspondent in Ilorin on Monday.

Ayinla, who led our correspondent to the shrine located at Aleyo village, near Afon in Asa Local Government Area of the state, said two suspects had been arrested in connection with the case.

The commandant said that the suspects had confessed that they were using the shrine for criminal activities.

He said the arrest of the suspects followed complaint received from a contractor, Mumini Abdul Rahman, that he was defrauded by them.

He said the suspects also collected the money to facilitate more contracts for Abdul Rahman through occultic means.

The commandant said the suspects were in the custody of the command, adding that they would be charged to court as soon as the command concludes investigations.

Ayinla, therefore, advised residents of the state to be wary of individuals who hid under the guise of religion to perpetrate crime.