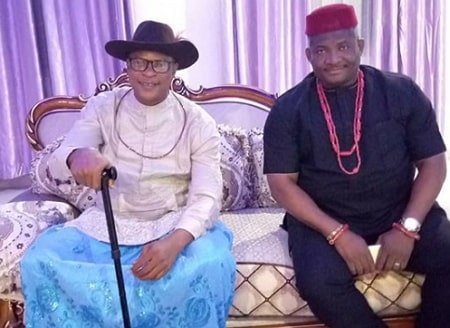 Nollywood actor and incumbent president of the Directors Guild of Nigeria (DGN), Mr. Fred Amata, has been honored with a chieftaincy title, in Oleh community, Delta State.

Amata, a movie director per excellence was named the Okugbe of Oleh Kingdom by the Odio- Ologbo of Oleh kingdom, HRM Anthony Williams Onovughe Ovrawah, at his palace in Oleh.

The honor came, following a courtesy visit by members of the DGN to the royal father, led by Engineer Daniel Omoyibo, who was later made patron of DGN.

“I’m happy and grateful to God for this. I also thank the Odio- Ologbo of Oleh kingdom, ” Amata said.

“It came as a surprise but I give God the glory. I was made a chief in the name of Jesus Christ our Lord and that makes me carry it loudly.

“The title I’ve been given is Okugbe, which means ‘The Gatherer’; one who causes unity, the one that gathers people together which is very close to the name that my father gave me.”

Fred Amata is a skilled Actor, Director and Movie Producer who has, without doubt played a great role in the Nigerian movie industry. He is a native of Isoko, in Delta State. His father, Pa John Ifoghale Amata was said to be the first African to shoot a celluloid film entitled “Freedom”, in 1957. He was also a famous playwright and actor before he died in 1997. His mother was an actress in the past. Indeed, born into the world of entertainment as his sibling, Zack, Alex, Erumena, Ruke,Elomai and of course, his nephew, Jeta, the first son of Zack are all into entertainment, each, as either producer, director, actor or all combined.

Amata emerged president of DGN in a keenly contested election in February, 2016.