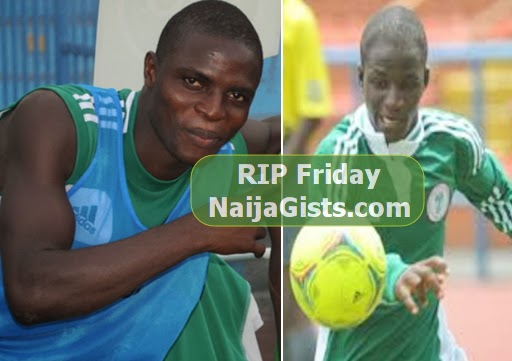 Another popular Nigerian footballer has died.

Friday Njengo, a defender with the Golden Eaglets is dead. He passed away at the ICU of Abuja National Hospital on Sunday after months in coma.

The footballer got involved in a ghastly car accident with him team mate Adamu Abubakar on their way to Calabar from Jalingo for the team’s 1st phase of final camping for the African Championship on Sunday February 3rd, 2013.

“This is very sad news. We had looked forward to the boy eventually recovering to be part of the team again as the squad progresses to the next level. It is a thing of sorrow to lose such a huge talent this way,” Nigeria Football Federation General Secretary, Barrister Musa Amadu, said today.

Friday sustained serious head injury in the accident, his team mate and goalkeeper Adamu Abubakar who sustained minor injuries was treated and released days after the accident.

Two days after the car accident, NFF President ordered badly injured Friday Njengo to the transferred to the National Hospital in Abuja for better treatment.

Several medical operations were performed on the Njengo and he was thought to be recovering well though still suffering from memory loss until his death on Sunday night.

Friday Njengo was regular with the Manu Garba team during the qualifying series for the 2013 CAN U-17 Championship, during which the Eaglets thrashed Niger Republic, Guinea and Mali home-and-away.

NFF said today that the burial arrangements of the deceased will be announced in conjunction with his family members.