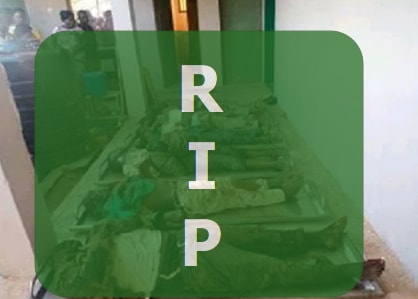 Some herdsmen yesterday struck at a suburb of Jalingo, the Taraba State capital, killing six traders at Iware market.

It was gathered that the deceased were also robbed of their cash.

Five of the victims are natives of Mayo-Lope, Lau local government area of Taraba State where scores were massacred and several others injured by herdsmen few days ago.

The other victim, whose name was given as Ethan Nast, is said to be a resident of Damsa local government area of Adamawa State.

A dependable source said the men, already displaced by crisis involving Fulani herdsmen in their area (Lau) on Tuesday came to Iware market with their cows to sell, do some other businesses and alleviate their suffering.

“They were trailed by their assailants all the way from Mayo-Lope where they set off, to Iware where they were hacked to death at the market,” the source said the killers disappeared immediately after their onslaught.

Sources said the killers invaded the market as though they were traders.

Another source, an eyewitness, said, as the market began to swell with buyers and sellers, the attackers emerged from the crowd in large number and began to machete the victims.

Four bodies were counted immediately. One of the victims who was identified as Baban Lumu, a cement dealer from Mayo-Lope, was fleeing from his attackers to a nearby police outpost, but no sooner had he arrived the police station than he died of the multiple cuts. Police recovered N80,050 from him.

Another victim died in the hospital.

“The market was disrupted, as people, men and women, ran for their dear lives,” an eyewitness told The Nation.

Armed policemen, led by a Divisional Police Officer (DPO), Abubakar Inusa, a Chief Superintendent of Police (CSP), arrived at the scene, at the nick of time.

They were seen battling hard to restore normalcy and convey the injured to the hospital.

Three persons were seriously injured. They were taken to the Federal Medical Centre (FMC) Jalingo, for treatment but one of them died in the hospital of “excess bleeding.”

The six bodies were deposited at the FMC’s morgue.

The arrival of the bodies threw the hospital in mourning mood, with many patients, particularly women, lamenting, wailing and weeping uncontrollably.

Police spokesman, David Misal, an Assistant Superintendent of Police (ASP), confirmed the attack and killings to The Nation.

Speaking with our correspondent, Misal said: “Six people were killed at Iware market by yet-to-be-identified persons.

“Some people brought cows to the market for sale but were attacked and killed when information got to Fulanis that the cows were stolen ones, he said.

Misal, who said the police were able to restore calm in the area, disclosed that the Police Command was gathering intelligence on how to trace those behind the attack and whether the attack is a spillage of the violence in Lau.

“We are trying to find out the perpetrators who took the law into their hands, instead of reporting to us, if really a case of cattle rustling was established,” he said.

In Kaduna, Woman Killed By Police Stray Bullet During Burial Of Slain Policemen
Native Doctor Dupes Hotel Worker Of N170K To Make Him Rich & Get Promoted