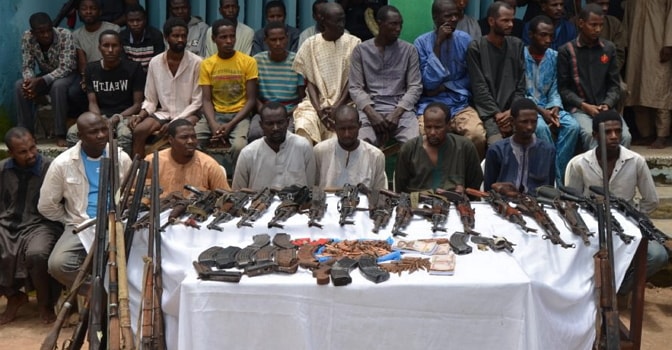 According to the Police, the suspects were responsible for the kidnap, killings, armed robberies of innocent commuters and travelers and villagers in villages and towns along Abuja- Kaduna –Birnin Gwari- Funtua – Zamfara state.

The suspects who belong to six different gangs were also responsible for the kidnap of Sheik Mohammed Ahmed Alqarkawi in Kaduna State.

Some of the gang members also collected N12million as ransom before the Sheik was released.

The Sheik’s kidnap also led to the death of four operatives of IGP Intelligence Response Team.

The operations of some of the suspects has also claimed the lives of many innocent Nigerians in FCT, Kaduna, Niger, Zamfara, Kogi, Benue, and some parts of Plateau States.

In a statement in Abuja on Monday by the Force Spokesman, Ag. DCP Jimoh Moshood, he said the arrest was made possible after a re-gird of operations Absolute Sanity with the deployment of more operatives and investigators of IGP Special Tactical Squad.

The Operatives led by Deputy Commissioner of Police, DCP Kolo Yusuf were deployed to unravel and arrest those behind the acts and bring them o justice.

On those arrested, Moshood said: “A total number of 31 suspects in six different gangs including three Commanders of bandits killing innocent people in Zamfara state and those responsible for the kidnap of Sheik Mohammed Ahmed Alqarkawi in Kaduna State and collection of Twelve Million Naira ransom before he was released.”

Items recovered from them include 22 AK 47 Rifles, one LAR Rifle, two single Barrel Guns, one locally made Pistol and one dane gun and 247 rounds of ammunition.

The Police said most of the suspects confessed to the criminal roles they played in the commission of the crimes they were alleged.

The Police also said most of the victims, some of whom were rescued from their captivities also identified them as those responsible for the kidnaps, armed robberies and car snatching.

Continue Reading
You may also like...
Related Topics:gang, robbery, Zamfara