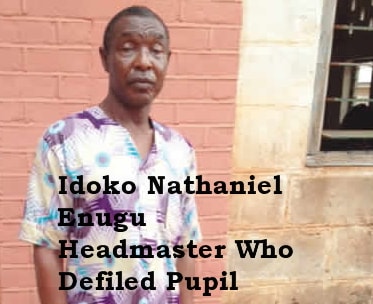 Police in Enugu has nabbed a school Headmaster identified as Idoko Nathaniel for defiling 4 pupils under his care at Mkpamteulo village, Enugu Ezike community in Enugu.

Amaraizu said that operatives of the Gender Unit of the state’s Criminal Intelligence and Investigations Department investigated the suspect for weeks in relation to his alleged nefarious activities.

He noted that the suspect had allegedly in the afternoon of July 17 at a bush near the school sexually abused and defiled the four minors aged between five and six years.

“It was gathered that the school headmaster had allegedly used his fingers on the private parts of the four female school pupils, inflicted serious injuries on them and thereby making them to be walking abnormally.

“It was further gathered that this was revealed as one of the victim school pupil opened up to her parents on what transpired in the school where she was defiled by the headmaster.

“This, however, led to the arrest of the headmaster. In his response, the headmaster regretted his act and blamed it on the Satan,” Amaraizu said.

The spokesman further revealed that the headmaster claimed that he was a father and had a wife at home.

“My wife is not happy with me over this incident. I am begging my wife, the parents of the children and God to forgive me,’’ Amaraizu quoted the suspect as pleading.

On whether he had been sexually assaulting other school children before now, the headmaster declared that this was his first time and that it was not done for anything.

The police spokesperson said that the affected pupils were currently being treated by medical doctors at the Police Medical Unit of the command, while investigation had begun.

Amaraizu said the headmaster would be arraigned in court on conclusion of investigation.