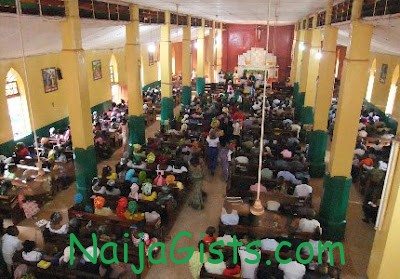 A self-proclaimed prophet in Edem, Nsukka LGA of Enugu, Prophet Ekene has threatened to blow up one Mr. Joseph Ugwu, a catechist at St. Dominic’s Catholic church over an allegation that he’s blocking the growth of his church. naijagists.com

We learnt the war broke out when the Prophet noticed his church business wasn’t as prosperous as it used to be.

According to reliable sources, the catechists, Mr Joseph Ugwu acted on the instructions from the Parish Priest, Rev. Father Patrick Ujah to pass serious warning to members of his church to avoid visiting Prophet Ekene’s prayer house or bear the consequences.

The warning we learnt resulted in a drastic reduction in his church members.

In order to tactically restore his lost glory, the prophet allegedly applied some Catholic doctrines in his prayer. The sign of the cross and the rosary was also said in every gathering.

“However, the style of his vision brought confusion among people, enthralled rancour, and mutual suspicion. People began to see their brothers as the source of their problems, while some who visited the prophet insisted that the names of their enemies should be revealed to them,” confirmed the source.

All attempts by the Parish Priest, to make Prophet Ekene get authority from the Catholic secretariat in Nsukka and recognition letter from his home parish to boost his authenticity proved abortive.

Consequently, the priest forbade Catholics from visiting the prophet or risk excommunication. Unable to bottle his anger and pains over adverse effect of the order on his church, the prophet sent emissaries to the catechist to stay out of his way. But the Catechist remained unperturbed, however, the prophet personally confronted him with severe warning and threat to bomb his entire household if he doesn’t to steer. He was also said to have threatened to become ruthless to any obstacle on his way.

However, nemesis caught up with the fake prophet when the youths of the community caught and arrested him for allegedly defiling little boys in the community.

He was humiliated and taken to the Igwe’s palace. The Prophet later confessed to the homosexual act after two of his victims recounted their experiences before the counsel of the elders. He was at the verge of being lynched by the angry youth but for the timely intervention of the traditional ruler who handed him over to the police.

The self-acclaimed prophet who was granted bail quickly fled the community for safety.