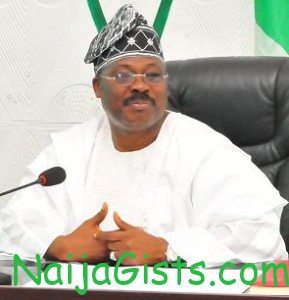 6 other commissioners were posted from their previous ministries and assigned new portfolio.

The reorganisation is coming exactly a week after the governor’s wife was allegedly rumoured to had been arrested in the United Kingdom for money laundering.

In a media briefing after the state executive council meeting, Secretary to the State Government, Alhaji Waheed Akin Olajide, announced the cabinet change, adding that the reshuffle was aimed at improving efficiency in the Ajimobi administration.

He said, “They (commissioners dropped) have not committed any offence. It is just to increase the tempo of governance in some key areas, so as to achieve the agenda we have set for ourselves within the time available.”

Former Commissioner for Applied Science and Technology, Mr. Adegbenro was moved to the Ministry of Trade, Investment and Cooperatives.

Meanwhile, the Special Adviser to the Governor on Education, Pastor Taiwo Otegbeye has been penciled down for the post of a commissioner pending approval of the House of Assembly.
(Source: DailyPost)

According to an insider, Governor Ajimobi who claimed their sack wasn’t related to his wife’s arrest allegedly sacked the 3 commissioners (which includes 2 information commissioners) over lack of trust.