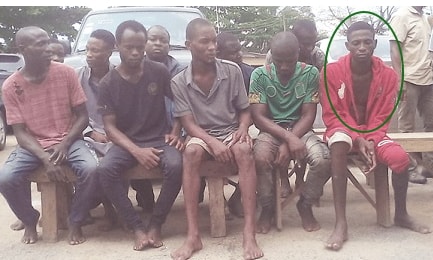 A 22-year old notorious cult leader, Mr. Azeez Idris a.k.a Az Notorious has confessed that he had killed so many people since he joined a cult group seven years ago in Ilasan area of Lagos. It was reported that Mr. Idris revealed that he joined the Eiye confraternity when he was 15 and since then he had killed many people, shed innocent blood and rose to the position of being their leader.

He confessed that whenever he was on a red attire, it means that he had concluded that he will kill many people on that day as such he cannot count the number over the years. The suspect made the revelation at the Lagos State Police Command where he was paraded with his cult members and other criminal suspects.

They were paraded by the Commissioner of Police, Mr. Imohimi Edgal at the State Command, Ikeja, Lagos. The police also recovered one locally made pistol, two battle axes, daggers, cutlasses, charms and a pair of red regalia as exhibits and they were kept at the Command.

During the parade, the police boss stated that Idris was the leader of Eiye confraternity in Ilasan area of Lagos and had confessed that he had killed many citizens in the state. CP Edgal said Idris equally confessed that once he puts on his red regalia, it meant that somebody must be killed.

The CP said the suspects will be charged to court after the conclusion of investigations.
At the Command, Idris reaffirmed what the CP had said and said he had reflected on his actions and realised that he did not know what he was doing and if given another chance, he will not go back to crime.