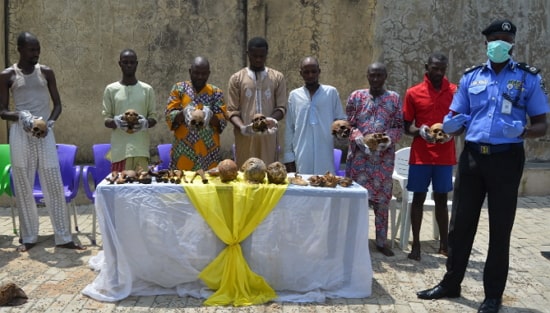 The convicts are local herb seller (alagbo), herbalist/ritualist, student and four others.

The offence was reportedly committed March, 2017 in Ilorin.

The first convict Azeez Yakubu bagged 15 years, while others bagged 10 years imprisonment each.

Their offences bordered on criminal conspiracy, trafficking and possession of 11 human skulls, 11 lower jaw bones, bunch of hair and 29 pieces of bones taken from various burial grounds in Ilorin, the
state capital.

Before the judgement, the first witness in the case, Mohammed Kamaldeen, police sergeant of the department of homicide of the state Criminal Investigations Department (CID) had testified that on October 5th, 2018, a case of criminal conspiracy and selling of human parts was transferred from Adewole Police Division to his office.

He added that the first accused person, Yakubu, was arrested with eleven human skulls, bones and human hair and brought to the station for investigation, adding that he recorded the exhibits as well as obtaining the statement of the accused.

Speaking further, he said the exhibits were sent to the University Teaching Hospital (UITH) for medical examination to determine if they are genuine human bodies.

According to him, the items were received at the hospital and after thorough examination; they were confirmed by Dr. Kazeem Ibrahim to be human parts.

Another witness, Matthew Omotosho informed the court that he was part of the team that arrested the first convict.

“When we got to his residence, (Yakubu) he was not at home. So, his house was surrounded by police. Due to intelligent gathering, we learnt that he was at Anifowose; we moved there and he was arrested.

We brought him to his house at Oke-Are.

“He confessed to the heinous crime, and took us to where those skulls and other human parts were kept in the ceiling of his house. They were all brought out.

Also testifying before the court is a member of Vigilance group, Fatai Adedoyin, who said he knows the first accused very well and that he was part of those who retrieved the human parts on his roof.

In his judgement, presiding judge, Justice Durosinloun Kawu, described the activities of the convicts as despicable and shameful and sentenced the first convict, Azeez Yakubu, to 15 years imprisonment with N100,000 fine each.

He sentenced other convicts to 10 years imprisonment each with N100,000 fine each. Justice Kawu added that the jail terms would run concurrently.

Justice Kawu also said that the prison terms would include period already spent in prison custody, adding that they were free to appeal the judgement.

Earlier, Justice Kawu overruled that the convicts were tortured by Special Anti Robbery Squad (SARS) operatives in Abuja to extract information contained in their written statement.

He described the defence as unreasonable and inconsistent.

He affirmed that the evidences found on the convicts were not animal parts like that of monkeys or gorillas, but that of human beings.