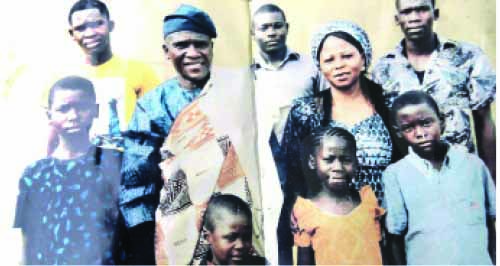 It has been agony and pain for the three children of Miskoom Francis Didi, a chief and ward head of Longvel, Shendam Local Government Area of Plateau State, weeks after they watched a gang of masked men viciously strangle their father to death.

They are burdened by memories of the horrific incident, which they say would remain evergreen, just as peace will elude them until the law catches up with those who murdered their father. The children, Moses, aged16, Patience, 13 and 10-year-old Samuel, had gone to a farm located few kilometres away from the community with their father at 6.30 am on Saturday, July 8, 2017, when the assailants who, unknown to them, had laid ambush, pounced on the traditional ruler and killed him in cold blood.

As they strangled him to death, the men from the pit of hell were unmoved by his plea for mercy; not even a flood of tears and shrill cries of teenage children could propel them to have a change of mind; they were on a mission to snuff out his life, and only left their victim after it had been accomplished. Then, they ordered the children to vacate the scene; a directive promptly complied with by fear-gripped Moses and his sister, Patience.

But Samuel, their younger sibling dared the harbingers of death, and declared his resolve to remain at the spot with the body of his father, even if it meant paying the supreme price. Piqued by his insistence, they descended on the 10-year-old primary six pupil, inflicting injuries on him, but he was resolute in his decision.

One hour later, Moses, who had fled earlier along with his elder sister, returned to the scene with an uncle, Elvis, to behold Samuel wailing as he laid on the lifeless body of their father. They promptly rushed to report the incident at the Shendam divisional police headquarters, where policemen were drafted to recover the corpse and thereafter deposited it at the morgue of the General Hospital in the town.

Later, medical examination was conducted on the remains of the 67-year-old traditional ruler at the Jos University Teaching Hospital, before it was released for burial on Friday July, 21, 2017, at Longvel, his village in Shendam Local Government Area of the state. Until his gruesome death, he was a prosperous farmer before being crowned Kana Nkur in 2009, after the controversial dethronement of his predecessor, Sule Sabo, by a first-class paramount ruler, late Long-Gomia of Shendam, Hubert Shaidas.