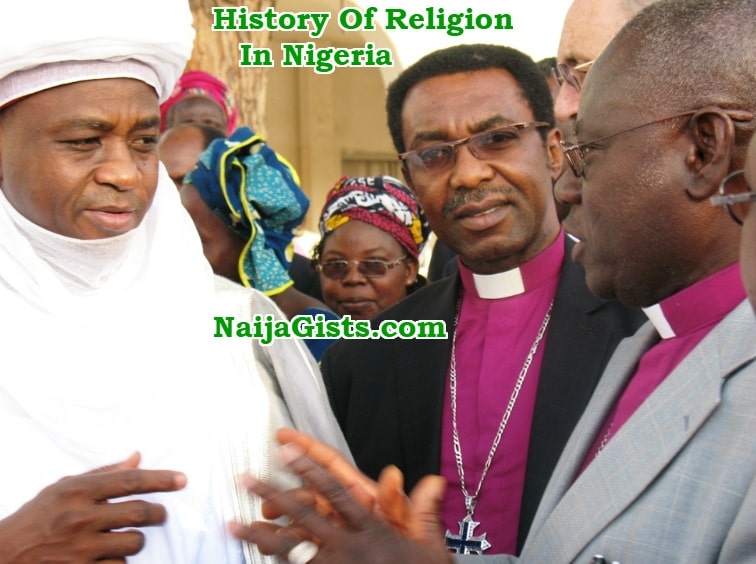 This article brings you the history of religion in Nigeria. And we’ll be looking at some interesting facts about Christianity, Islam and traditional religions in Nigeria.

Nigeria, the most populous black nation in the world, is divided along, not only cultural lines, but also along religion lines. In fact, the country is widely seen as the most religious country in the world. And while the religious division has resulted in several challenges/crisis, people of the opposing faiths have managed to cohabit peacefully, and form a sustainable understanding among themselves.

In the next section, we’ll be taking you through the history and origin of religion in Nigeria, with emphasis on how Islam and Christianity made their way up the ladder, to dominate the religion sphere of country.

History of Religion In Nigeria

Prior to the “Caliphate movement” and the “colonial era”, which brought Islam and Christianity (to Nigeria) respectively, there is only a single religion in practice – the traditional religion . This religion has been existing since as far back as the geographical entity known as Nigeria today has been in existence.

In the BCs and ADs, down to middle ages and the past centuries, every single tribe in Nigeria had at least one traditional religion that was synonymous to them. As gathered from oral narratives, the Yorubas have always identified with Obatala (Obata’asha), as a supreme god, and the likes of Esu, Ifa, Sango, Oya and the likes as important deities. On the other hand, the Igbos and the Hausas also have their own set of indigenous beliefs, which guide their acts.

In the late 18th century, the Northern part of Nigeria (Hausaland) was invaded by the Fulani-Islamic Caliphate Jihadist movers, led by Usman Dan Fodio. Dan Fodio’s exploits and acquisition of certain parts of Hausaland facilitated the spread of Islam down South. Overtime, with the influx of Muslim migrants and merchants from North Africa, Hausaland became an Islamic land. And the movement continued further South, where notable Southwestern regions (Yorubaland), like Ilorin were captured, and Islam became a force in the region.

Christianity, on the other hand, came at a much later time, specifically one century after the emergence of Islam in Nigeria.

The Christian faith was introduced by the British colonialists who invaded Nigeria in the late 19th century and early 20th century. With time, Christianity gained ground, and most people (especially from the Southern region of the country) dumped their respective traditional beliefs and adopted the new “holy” faith. One notable indigenous pioneer of Christianity in Nigeria is Ajayi Crowther, who translated the Bible into Yoruba language.

Today, with an estimated population of about 180 million, Nigerian is near-evenly divided between Islam and Christianity.

There are three main religions in Nigeria today; these are Christianity, Islam and the traditional religion. Geographically, the Northern region of the country is dominated by Islam, while the Southern region is dominated by Christianity. The central zone exhibits some form of balanced system, with Islam marginally edging over christianity in the region.

In this section, we are going to be looking, succinctly, into the three main religions, in relation to their dominance, practice and significance in the so-called “most religious country” in the world – Nigeria.

Christianity, as emphasized earlier, is one of the most important religions in Nigeria, with about half of the Nigerian population subscribing to the “Trinity” faith. And while all Nigerian Christians share a common belief in the sanctity, holiness and supremacy of God and “His son” – Jesus Christ – they are largely divided in doctrinal/religious practices.

In Nigeria, Protestants and Catholics dominate the Christian faith, with about 25% of the Christian population subscribing to the Catholic faith. A larger percentage of Nigerian Christians (about 60%) are of the Protestant’ faith, while about 10% are Anglicans.

Protestant churches in Nigeria are located mainly in the Southwestern region of the country (Yorubaland), and in most cases, they are founded and headed by Yoruba pastors. Notable mentions in this regard include Living Faith (headed Bishop Oyedepo), Redeem Christian Church of God (headed by Pastor E. A. Adeboye), COZA (headed by Pastor Fatoyinbo) and The Synagogue Church of All Nations (headed by Pastor T. B. Joshua) among others.

The Catholics are concentrated in the South Eastern region of Nigeria, otherwise known as Igboland.

Islam, just like Christianity, is a major religion in Nigeria, with over 80 million of the Nigerian population subscribing to the faith. As gathered, Nigeria is home to the largest number of Muslims in the whole of West Africa, significantly larger than her core Islam-dominated neighbours like Chad, Niger and the likes.

Just as what is obtainable in Christianity, Islam is also divided along doctrinal lines; into two basic belief systems – Sunni and Shia. And while the latter is faintly negligible in Nigeria, the former is the dominant Islamic belief system in the country (and in the whole world). In figures, more than 99% of  Nigerian Muslims are Sunnis, while less than 1% are of the Shia-Muslim faith.

Furthermore, the Sunni-Muslims in Nigeria are subdivided into various sects and brotherhoods, which include the Ahlul Sunnah (the core/original Muslims) and other less significant sects like Tijanniyyah, Ahmadiyyah and many more.

The Muslims are largely concentrated in the Northern region of Nigeria (Hausa-Fulani land), with shared dominance (with Christianity) in the South West, and faint popularity in the South Southern and South Eastern regions of the country.

Traditional religion in Nigeria is sort of “decentralized”, with each cultural group having their own set of traditional beliefs.

Among the three main tribal groups, the Yorubas have a stronger affinity to their traditional faith than other groups. In fact, a large portion of Yoruba cultural practices are centred around their traditional belief system. Notable traditional gods/deities in Yorubaland include Sango, Esu, Obatala, Ifa and Orunmila among others.

In the same vein, the Igbos have several traditional practices that are enmeshed in their cultural endeavours, especially those associated with masquerades and the likes. The most prominent Igbo god, widely worshipped in Igboland is Amadioha.

Overall, the traditional worshippers in Nigeria make up approximately 3% of the Nigerian population.

Religion with the Highest Population in Nigeria

However, other sources have swayed there findings in favour of Islam. According to a report from a prominent social research group based in Germany, about 54% of the Nigerian population (about 92 million) are Muslims.

In a nutshell, there are contrasting views and reports regarding the religion with the highest population in Nigeria. However, going by the credibility and popularity of some of these reports, Christianity appears to marginally edge out Islam as the dominant religion in Nigeria (by population).

Causes of Religious Conflicts in Nigeria

As a country that is divided along religion lines, Nigeria has had significant tussle with religious crisis, especially in the Northern region of the country. In Nigeria, religious crisis are basically between the Muslim faithfuls and the Christian believers.

Religious crisis in Nigeria has been happening since the eve of independence, some time in the early 1950s, when the two Abrahamic religions (Christianity and Islam) were just gaining ground in the country.

From this period to date, the underlying cause of religious conflicts in Nigeria has always been “religion intolerance”. And areas that are worst hit are states with significant Muslim/Christian population. States like Plateau, Benue, Taraba, Zamfara, Nasarawa, and Kaduna among others are of prime importance here.

Today, the insurgency in the North Eastern region of the country started as a religious crisis. However, it’s now developed into a full blown rebellion, with the insurgents, under the guise of Islamic movement, wreaking havoc to lives and properties of both Muslims and Christians in the area.

In summary, while the major cause of religious crisis in Nigeria has been attributed to intolerance, certain socioeconomic factors like poverty, lack of education, food insecurity and corruption among others, have aggravated the situation.

Have any input? Kindly share your opinion(s) with us in the comments section.

History And Origin Of The Hausa & Fulani Tribes In Nigeria: Their Culture & Religion
Protest Over Nigerian Army Brutality & Forceful Take Over Of Indigenous Land