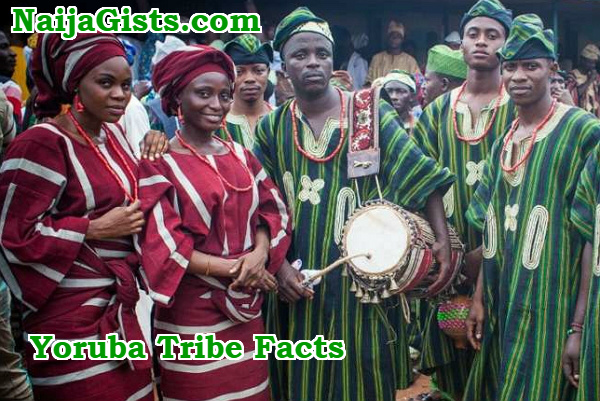 This article brings you some interesting facts about the Yoruba tribe in Nigeria, and we’ll be looking into their history, culture and religion.

The Yoruba tribe is one of the three largest and most powerful ethnic groups in Nigeria; making up a considerable portion of the country’s population. While the primary – indigenous – home of the Yorubas is Nigeria, there are well established Yoruba settlements/clans in various countries of the globe, especially in West Africa, South America and the Caribbeans.

Want to know more about the Yoruba people? Read on, as we take you through some interesting facts about the history, culture and religion of the Yoruba tribe.

Where Did the Yoruba Tribe Come from?

The Yorubas, as consensually believed by most Yoruba people, are descendants of Oduduwa – a divine being who descended from heaven. Oduduwa and some of his kinsmen and kinswomen migrated from the Arabian land in the Middle East, and set up a settlement in a region that is today known as Yorubaland.

In a nutshell, the original settlers of Yorubaland migrated from the Middle East. Hence, it is safe to say that the Yorubas have their ancestral roots in the Middle East.

The alleged creation of Yorubaland by Obatala, and the subsequent migration of Oduduwa (from the Middle East) remain controversial topics till date, as there is no tangible evidence to back up either of the stories. Besides, the stories have been dismissed as nothing but folktales by the Abrahamic faithfuls (basically the Muslims and the Christians), as well as the science community.

However, unlike what is obtainable in some tribes, the Yoruba tribe have a clearly defined and widely accepted historical path and origin. As gathered from several traditional sources, the ancestral town of the Yoruba tribe is Ile-Ife, which was created by Oduduwa and Obatala. Ile-Ife is widely seen (by Yoruba traditionalists) as the central point of earth, where the gods first descended.

The historic town, which dates as far back as the 4th century BC, grew in population and development. Over time, the town developed into an important urban centre with paved environment, huge markets and centralized government. At the height of Ile-Ife’s development and dominance, the Oyo Empire sprang out, and went on to displace the ancestral town as the central – most important – town of the Yorubas.

While the Oyo Empire conquered many lands and ruled for centuries, it was not until the 1600s that the empire became a real force of reckoning. At this time, documentation of Yoruba’s history began.

During the period of Oyo Empire’s dominance, the Yorubaland were invaded by the Fulanis, who were led by prominent Jihadist – Uthman Dan Fodio. This was before the arrival of the British colonialists to Nigeria. While the Yorubas were able to repel most of these invasions, the Fulanis were successful on a handful of occasions. One of such was the conquest of Ilorin, which is today, under the rulership of the Fulani Emirates.

Today, the Yoruba tribe remains one of the largest ethnic groups in, not only Nigeria, but in the whole of Africa. The tribe makes up approximately 20% of the Nigerian population.

Where Does the Yoruba Tribe Live?

Indigenously, the Yorubas are located in South-Western Nigeria and some parts of North-Central Nigeria, with about 40 million Yoruba people living in the regions. This population is spread across the six southwestern – Yoruba – states in Nigeria, including Lagos, Oyo, Ogun, Osun, Ondo and Ekiti. In the North-Central zone, Kwara and Kogi are the only states with substantial Yoruba population.

Also, it is important to point out that the Yoruba tribe is somewhat a “multinational” tribe, as there are local Yoruba settlements in the Carribeans, Brazil and West African countries like Ghana, Togo and Benin Republic among others. In fact, Yoruba stands out as one of the most significant tribes in Benin Republic.

The Yorubas are generally known for their cultural significance, and respect for elders and leaders. As a civilized tribe, the Yorubas have a well laid down rule/law structure, which guides their acts and utterances.

While most of these cultural laws, beliefs and acts are in line with the tribe’s traditional faith, majority of the Yorubas (the Muslims and the Christians alike) still adhere to them. For instance, in Yorubaland, the tradition pertaining to the naming of a newborn is that; every newborn should be given a name(s) within the first eight days of birth. This cultural practice is still in vogue till date, and it is widely practiced by the Yorubas, across all faiths.

In the same vein, respect for elders is engrained in the culture of the Yorubas. And irrespective of your social profile and wealth status, it is ignoble of you to show disrespect, of any form, towards an elder. In a nutshell, RESPECT is sacrosanct in Yoruba’s culture.

What is the Yoruba Tribe Known for?

The Yorubas exhibit some sort of uniqueness in terms of appearance (though negligible), belief system, culture, and more significantly, education. The Yorubas are widely regarded as the most knowledgeable/educated tribe in Nigeria. This is evident in the intimidating number of Yoruba professors, compared to other tribes in Nigeria.

While education is highly attributed to the Yorubas, there are other interesting things that the Yoruba tribe is known for.

Below are some of these things:

Facts About the Yoruba Religion?

In figures, about 8 million Yorubas still practice the traditional religion, which, in itself, is diverse, with deities (gods) and objects of worship running into thousands. Basically, all these deities are seen as ministers of God – the supreme being.

Who is the Yoruba God?

According to the traditional belief of the Yorubas, the supreme creator – God – is known as Olorun, who delegates the control of earth to some of his ministers (smallers gods). There are two primary gods, who assist the supreme God in piloting the affairs of mankind. These gods are Esu – in charge of delivering sacrifices to Olorun – and Ifa – the god of divination who interprets Olorun’s wishes to mankind.

It is a common knowledge that the Yorubas have the largest number of twin births in the world; significantly more than  any other tribe in Nigeria. Hence, we’ll be bringing you some interesting facts about twins in the Yoruba tribe.

Below are some of these facts:

The Yorubas are known for their hunting exploits, especially in ancient times. In the spirit of their hunting activities, they are known to recite some chants to “keep up the spirit”. These chants are poems, which are commonly referred to as Ijala in Yoruba dialect.

The most popular hunting chant or Ijala for lion is as follows (translated):

“The mighty lion that encircles the bush with his urine. King of the jungle who forces the brave young hunter up a thorn tree. The hunter says ‘except for elephant; except for man; except for the dark black tree; except for God… “.

Note: This chant was composed in Yoruba’s native tongue; hence, its translation might make little or no sense to non-native speakers of the language.

Nevertheless, the poem/chant illustrates the dominance of lion in the jungle.

Are you enlightened? Have any addition? Kindly drop your comments in the box below.