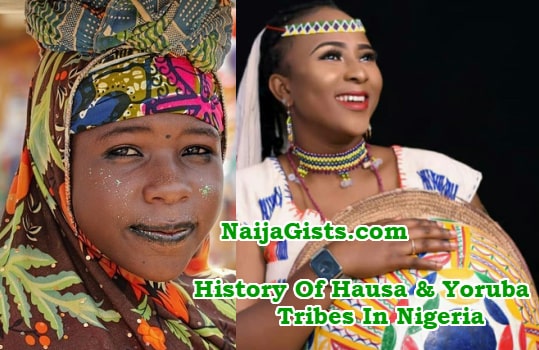 History and Origin of the Hausa & Fulani Tribes in Nigeria: their Culture & Religion

The Hausas and the Fulanis make up a significant portion of Nigeria (by population and even landmass). And while they are generally regarded as one (as Hausa-Fulani), they are, in fact, two separate, albeit similar, ethnic entities dominating the Northern region of Nigeria.

Here, in this article, we are going to be taking you through the basic differences, as well as similarities, between the Hausas and the Fulanis in Nigeria; including their origin, history, culture and religion. Read on!

However, of all the stories about the origin of the Hausa tribe, one has, somehow, managed to garner significant recognition and widespread acceptance (as the true tale of the Hausa tribe’s origin). This is the story of “Bayijidda – the Baghdadi prince from the Middle East”.

As recounted, Bayajidda migrated to Northern Nigeria, and got married to a royal blood who gave birth to a son named Bawo. Bawo went on to create the so-called “7 Hausa states” (core and peripheral), some of which later developed into the contemporary Hausa states we have today.

In a nutshell, if the Bayijidda tale is to be believed, the origin of the Hausa tribe can be traced back to Baghdad in the ancient Ottoman Empire (modern day Iraq). However, this remains unsubstantiated, as there is no evidence, beside oral narrative by successive generations, to back up the legend.

History of Hausa Tribe in Nigeria

According to the popular legend, Bayijidda explored the northern land of Nigeria (now Hausaland). During this time, he came to the rescue of the people of Daura (the oldest Hausa kingdom), by killing a serpent, which up to that time, had prevented the people from drawing water from the city’s well, which served as the major source of potable water supply in the kingdom. This got the attention of the queen (of Daura), and a while later, Bayijidda got married to the queen.

Bayijidda and the queen’s marriage bore fruit; they welcomed the birth of their son – Prince Bawo – shortly after. Prince Bawo grew up to become a strong and intelligent leader, and went on to create the legendary “seven Hausa states”, alongside his six sons. Some of these states, over the centuries, grew significantly. And today, they to make up what is known as Hausaland today.

In the late 18th century and the early 19th century, the Caliphate movement, which was spearheaded by Islamic Jihadist – Sheikh Uthman Dan Fodiyo – resulted in the collapse of some Hausa kingdoms, and the subsequent dominance of the Fulanis in some parts of the region, which, till date, are still under the Fulanis’ rule.

Today, the Hausas in Nigeria have diffused into many tribes in Nigeria, notably the Fulanis, Tuaregs, the Shuwa Arabs, the Nupes, the Ebirras and even the Yorubas. They are indigenously located in the North Western, North Eastern and North Central zones of Nigeria.

Aside Nigeria, the group can be found in other African nations like Niger Republic, Mali, Senegal, and so on.

The Fulanis and the Hausas are often – ignorantly – regarded as one. While they share quite a number of similarities in terms of religious belief, cultural system and the likes, they are actually two separate tribal groups.

The Fulanis, who are traditionally nomadic in nature, migrated en-masse into Hausaland sometime in the 1300s (14th Century). They lived peacefully with their host for centuries, until the late 18th Century, when the Fulani War broke out. The war/Jihad, which was led by Usman Dan Fodio, resulted in the acquisition of some parts of Hausaland by the Caliphate.

On a brighter side, however, the war also led to the free mixing of both tribes; culturally, religiously and even sexually. Today, about 10 million (more than 50%) of the Fulanis share a blood line with the Hausa tribe, basically via successive intertribal marriages, which dates back to the 14th century.

Although the conjoined tag: Hausa-Fulani; is still widely criticized and rejected by certain groups (from both sides), other tribes generally see them as one. And with the strength of the bond they share, it is not far-fetched (to classify them as a one). Together, they make up about 40% of Nigeria’s total population.

Hausa people have a unique cultural heritage, which is, by all standards, one of the richest in Nigeria. The tribe is one of the largest in Nigeria and the whole of West Africa. In every locality they dominate, they have a well established cultural system.

The Hausas are generally famous for their Arab-styled dressing (with turban and hijab/niqab) and architecture. Their traditional buildings don the look of medieval Middle Eastern architecture.

As widely believed, the Hausas have their roots in the Arabian land of Baghdad; and they have, till date, adopted the ways of the Arabians. While they weren’t originally of the Islamic faith, the massive migration and trade adventures of North Africans into Hausaland, coupled with the effect of the Caliphate movement, resulted in the religious revolution of the Hausa people.

Today, more than 90% of the Hausa people are Sunni Muslims, with a tiny fraction being of the Christian faith. Furthermore, like other local tribes in Nigeria, the Hausas have traditional worshippers, who are generally insignificant. The traditional faith is locally known as Maguzawa, which, in actual sense, is a form of indigenous confraternity.

What is Hausa Tribe Known for?

As pointed out earlier, the Hausas are unique set of people, who have differing social, religious and cultural values compared to other tribes.

Below is a list of some facts about the Hausa tribe:

Is Hausa a Tribe or Language?

Hausa is a tribe, and at the same, a language! It is the indigenous language of the Hausa people, and it is widely spoken by about 80 million people (native and non-native speakers) across Africa.

Who is the Founder of Hausa Kingdom?

As stated earlier, the actual founder of Hausaland remains a controversial topic till date. However, in terms of prominence and acceptance, Bayijidda – the prince from Baghdad – is widely regarded as the father of the Hausas.

However. it was Bayijidda’s son and grandsons (Bawo and sons) who founded the Hausa Kingdoms.

What is the Population of Hausa in Nigeria?

According to recent estimates, the Hausas make up about 30% of the Nigerian population. In figures, the population of the Hausas in Nigeria has been estimated at 55 million.