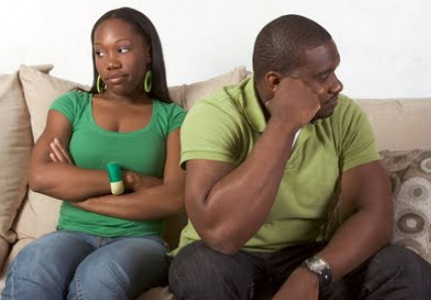 Control freaks make terrible lovers and husbands. No sane woman should put up with a controlling man who thinks he has the right to tell you how to live your life.

Women married to control freaks have no peace. They have no life, no friends and no hobbies. They are always walking on egg shells around their Lord Lugard husbands.

These women have no say at home. They live in the shadows because their men control every aspect of their lives. They have to explain where they go, who they meet and what they do every day. It’s like living in prison.

They are always afraid of what might make their husbands explode and lash out at them in anger. They wear what Mr. Husband wants them to wear. They only visit their parents or siblings when almighty husband man agrees to it.

I don’t know how these women survive living like slaves in homes where they are constantly told by society belong to them as long as they can endure all the crap their terrible husbands throw at them.
If you are wondering if you are dating or married to a control freak, take note of the signs below. You are an adult who knows right from wrong, you shouldn’t allow a human being reduce you because you are dating them or married to them.

Controlling husbands want to know their wives’ every move. They can’t bear the thought of not knowing where you are and what you are doing. If your man is calling you non-stop and texting ‘what are you doing?’ and constantly interrogating you about where you are, he’s a control freak.

Getting angry when you are out with your friends or freaking out when he hears you say another guy’s name are tell-tale signs that your man has some major jealousy issues typical to controlling men. He wants to control who you meet, where you go as well as your relationships.

You are married to a control freak if your mobile phone is his mobile phone too. I cringe when I hear women allow men they just married break their sim cards because they don’t want them relating with people from their past. What kind of silly behaviour is that?

This may look like love at first but it’s all about control. Your husband has no right to destroy your sim card. You have been relating with some people before he came into the picture and he shouldn’t stop you from relating with these people in your life. That’s one of the signs of a control freak.

When you are in a relationship with a man who is a control freak, he may start snooping through your phone. Controlling partners feel that they have the right to know more than they actually do. Even if you have nothing to hide, he wants to know what you are doing on your phone.

Men who snoop through their women’s phones are the ones who are quick to call them prostitutes just to make these women feel bad for relating with the opposite sex. I don’t know how they ended up with these prostitutes as wives in the first place.

If he’s your harshest critic, he’s a control freak. Such men have the tendency to be condescending. They put you down to feel better about themselves. It gives them a sense of control knowing they can influence the way you feel.

Guys who always want to be right are control freaks. It doesn’t matter if they know little or nothing about the subject being discussed, controllers have opinions for everything and anything. And if you don’t agree, they will do everything in their power to sway you. They will even get angry if you don’t comply.
If he’s too clingy, he wants to control you. It may seem endearing at first, the good morning texts, the calls before bed and constant contact to see if you are okay. Those gestures may seem thoughtful, but there’s a fine line between sweetheart and freak.

Just as spontaneity scares controlling men, not being in total control does too. Everything down to what you do, what you wear, what you eat and where you go comes right down to him.
He will also try to change little things about you like your personal style, hairdo and even go as far as correcting you every time you do something you like. He just wants you to do things you like as if you are a robot.

Control freaks want to maintain order and control in your relationship. One of the tell-tale signs that he’s slowly cutting you off from your friends is his readiness to bad-mouth them. He doesn’t like your friends and he won’t hesitate to badmouth them so that he can severe your relationship with them.
If you are married to a control freak, he won’t like it when you make decisions on your own. He will get upset with you when you don’t consult him before making a decision. He doesn’t like when you do things without him, and he becomes upset when you exercise any free will on your own.

A control freak will often offer you advice even when you didn’t ask for it. What’s worse, they will most likely get upset with you if you are not following their advice. They just don’t like losing control.
Men who always criticize your behaviour and choices are flexing their control muscle. They pretend they are trying to help but they have a hidden agenda to control you and your life. If your partner is constantly telling you what to do, be aware that he is a control freak.

Even if you have never lied to them before, if your partner is paranoid that you are always lying to them, it’s possible they are a control freak. They accuse you of lying about where you have been, who you are hanging out with, and who you have been talking to. Nothing ever seems like the truth to them.
If he wants the passwords to your phone, computer, Facebook account, Instagram account, he’s a controlling person. He may try to pass this off as proving that you are trustworthy, but it is really to make sure he has complete control over you and the things you do online.

Women should stop mistaking these abnormal behaviours for love. Love is not control. Being in a relationship with a control freak can be very unsettling. Often times, the relationship isn’t healthy at all. Take action and stop being controlled by another human being.

If you are in a relationship with a control freak, assert your boundaries. You are your own person who deserves to have privacy. If there’s no reason for them to distrust you, then you should make sure that you have your boundaries fully asserted. You may need to constantly remind the controller about your boundaries several times before they get out of the habit of controlling you.

You don’t need to tell them every single thing that you are doing. You don’t need to tolerate any behaviour that seems to be controlling. Make your boundaries very clear, and if they can’t respect them, then it’s time to cut them off.

Have a support system. Tell your friends and family what is happening. It’s important to have people outside of your relationship know that these things are happening so that they can support you. Make sure that there’s someone else who knows about your partner’s control freak behaviour.

Women, a control freak is not in a healthy place to have a relationship and you deserve someone who trusts you and doesn’t try to control your every move. Such men diminish your self-worth. If he refuses to change, leave.