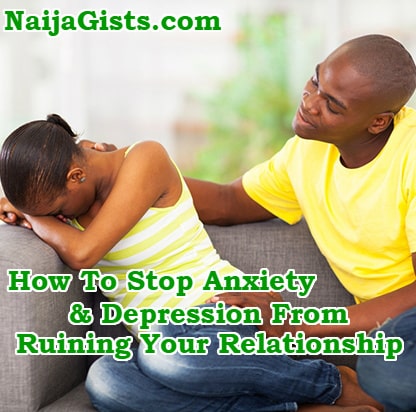 How Prevent Anxiety And Depression Destroying Your Relationship

Anxiety and depression are conditions which are known to commonly interfere with the mind and lives of people.

Anxiety is characterized by constant fear, nervousness and worry. It is quite normal for people to feel anxious about one situation or the other in daily living it happens to everybody.

However anxiety becomes a problem and a disorder when it begins to greatly disturb your everyday life and activities.

Depression is somewhat similar in nature to anxiety being that it is also a disorder which targets and affects the mind and thoughts of a person. But unlike anxiety, depression is characterized by sad and dark thoughts and emotions.

Depression may not necessarily accompany anxiety but anxiety is quite often a by-product of depression. However people can suffer from either of these two conditions as they do not necessarily always go hand in hand.

However the case may be, either of this conditions results in unpleasant side effects and should be cured as quickly as possible as they could seriously harm the affected individual.

Signs Of Anxiety And Depression In A Relationship

People who suffer from anxiety display certain kinds of behavior and characteristics all depending on the level of their disorder. Some anxiety attacks can be triggered by specific words, actions, environment, smell, people etc.

One of the common ways to identify anxiety is extreme and irrational fear. It is normal to feel nervous and afraid for specific and concrete reasons. But those who suffer from this disorder have these feeling in extremities. Sometimes due to a specific situation but often for circumstances and situations that have occurred in the past or are even yet to occur. Anxiety creates great fear of imminent harm.

Another sign of anxiety is restlessness and nervousness. Often those with this condition are regularly agitated and can’t seem to get adequate rest as a result. They find it difficult to sit still as their nerves seems to be in overdrive. Most times they are unable to naturally fall asleep and when they do, they tend to have restless nights and do not feel refreshed when they wake up.

When these people come under anxiety attacks they experience difficulty in breathing, accelerated heart beat, profuse sweating and goose bumps and in severe cases they experience the urge to throw up, dizziness and fainting.

People who suffer from anxiety display a few and sometimes all of these signs and more it all depends on the level of the disorder.

Those suffering from depression experience unhappy thoughts and emotions they lose interest in people, activities and life in general. They mostly want to be left alone to brood and would not want to be disturbed. Because of these overwhelming emotions which have been entertained, they experience fatigue and energy drain. Quite often they are miserable and feel they are of no importance or value to anyone. In severe cases such people have been known to entertain the idea of suicide.

People could suffer from the usual sadness and unhappiness that depression is characterized by but only for short periods of time, a few days usually. This kind is natural and common to every human being and may not necessarily be termed as depression until the occurrences begin to last for a long space of time or become a very frequent happening. At such point it highly advised that you seek help immediately.

Reasons For Anxiety And Depression In A Relationship

Experiencing anxiety and depression disrupts your lifestyle and activities. Your behavior and emotions affects not just you but people around you as well. Going through this condition whilst in a relationship is a difficult task for both partners involved. This could possible lead to the death of the relationship a times.

In a relationship dealing with a depressed and anxious partner can be quite demanding and sometimes frustrating. Their moods and attitudes could sometimes get to you quite deeply. Feelings of guilt may surface concerning your partners current state as you may begin to feel responsible in one way or the other for the condition.

These disorders may come from within in the sense that your anxiety and depression is just you dealing with things and situations. Other times it could be as a result of being in a bad or unhealthy relationship.

Whichever is the reason for your current state of anxiety and depression it is best to seek professional help and quickly too. To prevent any form of harm and further damage. You should see a doctor so your condition can be properly diagnosed and subsequently treated.

How You Know You Are In An Unhealthy Relationship

A relationship can be termed unhealthy when there is physical and verbal abuse. This could lead the abused party into a state of anxiety and depression, if they persist and continue with it. The abused party is always in an anxious state, as they often have to walk on eggshells so as not to trigger their partner’s wrath. Verbal and physical abuse sees one partner physically and verbally assaulting the other and with time, the abusive nature gets hold of the mind of the abused party.

Over dependency could also be another sign. Being in the company of your partner in a relationship is important. However you should have an independent existence outside of each other. Associate with friends and family, mix and socialize, your happiness should not solely be dependent on each other; it is too much of a burden to bear.

Frequent fights and mistrust amongst partner could eventually turn a relationship sour. Arguments and misunderstandings are common happenings in a relationship but when these occurrences become too frequent and heated, it is perhaps time to take a closer look at such a union to see the best way to address it.

Partners who mistrust each other in a relationship perhaps have no business being together. Jealousy and insecurity may rear its head every once in a while but it should not be allowed to get out of hand. There should be mutual trust and respect. Boundaries should be respected being suspicious and expecting the worst could lead you into a state of anxiety.

Partners should have mutual respect for each other’s thoughts and idea. There shouldn’t be an atmosphere of control and inferiority. Both partners should operate on a level of equality. Compromises and decisions should be made as a team and not solely by one person to avoid the other feeling left out or controlled.

This and more could be signs that a relationship is leading you down an unhealthy road. You should leave now before things get worse and it affects your health and sends you into a problematic state of anxiety or depression or both.

How To Overcome Anxiety And Depression

The treatment for overcoming depression and anxiety is basically the same as both take hold of the mind of its victims. First seeing a doctor to properly ascertain the problem is wise. Sometimes these conditions could be warning signs of other medical issue so, first going to see a medical person is recommended.

Tests will be arranged and carried out drugs and treatments will be subsequently given if needed. Personally one could make a few changes and adjustments in order to fight anxiety. You could reduce certain diets or eliminate them all together; like foods which contain any form of caffeine. Alcohol should as well be drastically reduced or removed from your diet.

Similar treatments are used to fight both anxiety and depression such as: the use of antidepressants and such drugs, bringing your thoughts under control, try as much as you can to control your mind and the thoughts going through it with enough practice, you could gradually get control of this disorder. Also get as much rest as possible. Practicing breathing and nerve calming exercises could also aid in this fight.

How To Help A Depressed Partner In A Relationship

When this has been honestly ascertained it is time to convince your partner to get the much needed help. They need lots of love, understanding and support not blame and criticism.

Seeing a doctor is a step in the right direction, with medical help this disorder can be effectively treated. These conditions are preferably viewed as disorders rather than outright mental illnesses they could be treated adequately with care and support.

Anxiety and depression are conditions which should be viewed for what they are and not overlooked or handled alone. These disorders are treatable so encouraging people with such conditions to get immediate help is the safest thing to do.