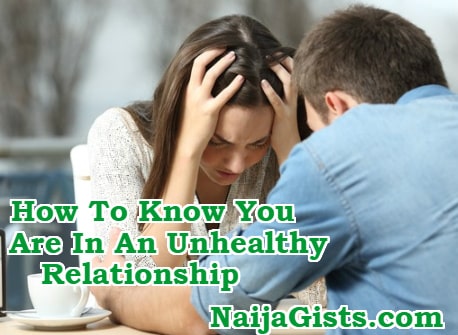 How To Know You Are In An Unhealthy Relationship

A relationship can be termed unhealthy when there is physical and verbal abuse. This could lead the abused party into a state of anxiety and depression, if they persist and continue with it. The abused party is always in an anxious state, as they often have to walk on eggshells so as not to trigger their partner’s wrath.

Verbal and physical abuse sees one partner physically and verbally assaulting the other and with time, the abusive nature gets hold of the mind of the abused party.

Over dependency could also be another sign. Being in the company of your partner in a relationship is important. However you should have an independent existence outside of each other. Associate with friends and family, mix and socialize, your happiness should not solely be dependent on each other; it is too much of a burden to bear.

Frequent fights and mistrust amongst partner could eventually turn a relationship sour. Arguments and misunderstandings are common happenings in a relationship but when these occurrences become too frequent and heated, it is perhaps time to take a closer look at such a union to see the best way to address it.

Partners who mistrust each other in a relationship perhaps have no business being together. Jealousy and insecurity may rear its head every once in a while but it should not be allowed to get out of hand. There should be mutual trust and respect. Boundaries should be respected being suspicious and expecting the worst could lead you into a state of anxiety.

Partners should have mutual respect for each other’s thoughts and idea. There shouldn’t be an atmosphere of control and inferiority. Both partners should operate on a level of equality. Compromises and decisions should be made as a team and not solely by one person to avoid the other feeling left out or controlled.

This and more could be signs that a relationship is leading you down an unhealthy road.

You should leave now before things get worse and it affects your health and sends you into a problematic state of anxiety or depression or both.

Continue Reading
You may also like...
Related Topics:relationship, signs, unhealthy