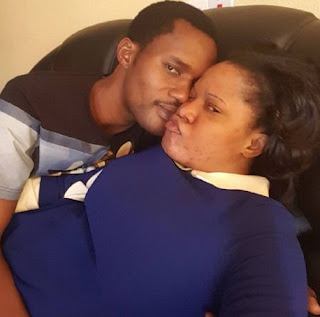 Sunday November 27, 2016 – How Toyin Aimakhu’s Romance With Notorious Robber Seun Egbegbe Put Her In The Eyes Of The Storm

How on earth can she get this mess off her back? It was only a stint romp, but the romance was faulty from start to finish. And if actress Toyin Aimakhu had enjoyed some monetary largess from Seun Egbegbe, it is doubtful that they are worth the shameful incidents in the aftermath of that affair.

‘Nobody’ knew who Seun Egbegbe was, until about a year ago when the actress introduced him to the media in the course of their controversial romance. She had just left her husband and fellow actor, Niyi Johnson, on the account of infidelity, leaving many to wonder if Egbegbe was any better

They had concealed the relationship initially; with Aimakhu claiming it was avuncular, but it only a matter of time before denial gave way to silence that spoke volumes. He took her on a secret romantic trip to Dubai in September 2015 and presented her with a Range Rover SUV, stuff that it was clear her struggling ex-hubby couldn’t afford. She threw caution to the wind until the breeze blew back with unpleasant heat. She must contend with his illiterate mien, domineering attitude, petty jealousy, assault and public ridicule.

About this period last year, Egbegbe dispossessed her of the Range Rover SUV when he arrived a movie set in rage, ordering her to surrender the car key. Early this year, Egbegbe was alleged to have kidnapped the actress as a way of preventing her from social media activities for a while. He became a thorn in her flesh, boasting to bring her career to an end. When it was obvious she could no longer live with his attitude, she involved the police who made Egbegbe to sign an undertaken never to threaten her again. She had confessed that his threats affected her business as other producers refused to cast her for movie roles in order to avoid Egbegbe’s trouble.

With the episode on Egbegbe formally closed to her life and career, Aimakhu must have been advised to do something that will make fans see her in positive light again. That was when she joined the #SaveMayowaCampaign that sought fund for the now deceased 29-year old Mayowa Ahmed who battled Ovarian Cancer. Everything appears to be working for her until she made another gaffe that sent tongues wagging. Aimakhu pulled out of the fund-raising over reports that the lady’s parents knew she could not be cured but went on with the fund-raising. They thought she betrayed the sick and hasten her to the grave for giving up, perhaps for the worst reason.
The media has not forgoten how Egbegbe sneaked to its headlines. Thus, when anything pops up about the guy, he is quickly linked to the actress. Unfortunately, nothing remarkable about him has surfaced; not a movie he produced or marketed has made anything worth the talks, until he was caught stealing in the market place. And that has given him another identity as a thief, the worst so far, compared to previous adjectives like controversial, arrogant, extravagant and assaultive.

Last Tuesday, Egbegbe was beaten to pulp for trying to steal nine pieces of iPhones at the Computer Village, Lagos. He was only rescued and detained by the police.

The incident has put a question mark to his source of riches, especially with the loss recorded by filmmakers in the face of intense piracy.

The effrontery of carting away a heap of mobile phones leaves much to the imagination, that some insinuating he could have depended on some spiritual powers which eventually failed. It was as though the shop attendant suddenly came out of hypnosis only to run towards Egbegbe who was about driving off in his jeep.

Attempting to make a cover-up, Egbegbe claimed he was going to bring the money from his car. But that was for the lazy press to consume, because if that was the case, bringing out the money could have proved he had a genuine motive and that could have spared him the mob action. And come to think of it, each of that phone costs close to N300, 000 and one wonders if he had approximately N3million to pay for the entire phones.

Well, all those excuses came on the spur of the moment. The shame can no longer be covered, as the Police, on Thursday, charged the case to court after he spent two nights in their custody, from where he was remanded in Kirikiri prison.

This may be the tale of a Yoruba film marketer; the life story of Toyin Aimakhu will not be complete without the name of Seun Egbegbe. The stigma, as it is for the actress, is a rotten past which keeps hunting her. For her ex-husband, Johnson, they probably were not meant to be.