Detectives from the Zonal Intervention Squad, Ladegboye Police Station, Ikorodu, Lagos, have arrested a 42-year-old man, Ikenna Echedowo, for allegedly attempting to murder his wife, Felicia, with a machete.

It was gathered that trouble started when Felicia arrived home around 11.33pm on April 2, 2019, and the generator was said to have gone off as it ran out of fuel.

Ikenna was said to have questioned his son why the generator went off, and as the son was trying to explain to him that it ran out of fuel, the suspect tried to beat him.

The mother, Felicia, was said to have intervened and Ikenna allegedly was furious with her for dictating how he should deal with their son.

An eyewitness, who did not want his name mentioned, said Ikenna shifted his anger to his wife by asking her to leave his house. 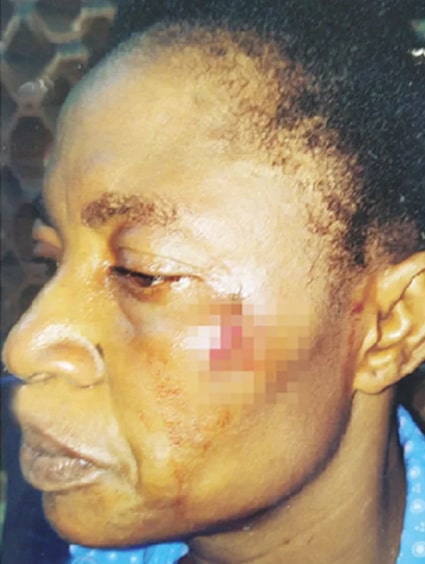 The eyewitness stated that when the wife asked him to give her part of the money he realised from selling her plot of land so that she could move on, Ikenna became enraged and asked the woman to wait for him outside.

The suspect was said to have emerged from his room with a sharp-edged cutlass, which he allegedly flung in the direction of his wife’s head; the woman, however, used her hands to block the machete blow.

The police thereafter arrested and arraigned Ikenna before the Ijede Magistrates’ Court for attempted murder.

The prosecutor, Aminu Isaac, said from the information gathered, the woman had been living in constant fear as Ikenna had often threatened to kill her and bury her corpse in the house to erase traces.

He stated that a search conducted around Ikenna’s house revealed that he had two other machetes apart from the one he used on Felicia.

Ikenna, who was arraigned on two counts of unlawful assault and an attempt to murder Felicia, pleaded not guilty to the charges.

The charges read in part;

“That you, Ikenna Echedowo, on April 2, 2019, around 11.40pm at No. 6 Grace Adegbamigbe Street, Eleshin area in the Ikorodu Magisterial District, did unlawfully assault one Felicia Echedowo of the same address by beating her, thereby committing an offence contrary to and punishable under Section 172 of the Criminal Law of Lagos State of Nigeria, 2015.

“That you, Ikenna Echedowo, on the same date, time and place in the aforesaid magisterial district, after seriously beating one Felicia Echedowo of the same address, did attempt to murder her by cutting her on her left hand with a very sharp cutlass, which caused her bodily harm, thereby committing an offence contrary to and punishable under Section 230 of the Criminal Law of Lagos State of Nigeria, 2015.”

The presiding magistrate, Mrs A. Oshodi, granted the suspect bail in the sum of N200,000 with two sureties in like sum, who must reside within the Ikorodu Magisterial District.