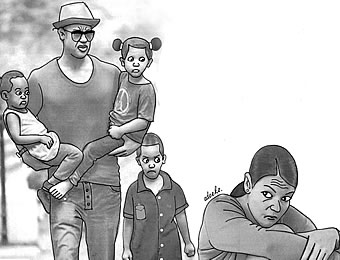 “My Wife Wants To Kill Me With Children, She Is Giving Birth To Children Like Rabbits” – Divorce Seeking Man Tells Court

A 9-year long marriage was yesterday dissolved yesterday after a 39-year-old man, Michael Ayinde took his wife, Glory to court for giving birth to children at will.

Mr Akin Akinniyi, the President of Igando Customary Court in a Lagos suburb, said that it was obvious from available testimony and the respondent’s refusal to appear in court that the marriage had hit the rocks.

“Throughout the duration of this case, the respondent (Glory) refused to honour court processes.

“Both parties henceforth cease to be husband and wife and are free to go their separate ways without any hindrance or molestation,’’ Akinniyi ruled.

The News Agency of Nigeria (NAN) reports that Mr Michael Ayinde had earlier told the court that his wife, whose name he gave as Glory, enjoyed “giving births at will’’ without consideration for the prevailing economic situation.

According to him, Glory has had six children within the nine-year duration of their marriage.

“Before I married Glory, I warned her that I needed only two kids irrespective of their gender so that I can afford their upkeep. She agreed only for her to discard the agreement after marriage.

“My Lord, my wife wants to kill me with children. She is giving birth to children like rabbits. In nine years, she was delivered of six babies. “She was sacked from her workplace just because she gets pregnant immediately after she resumed from maternity leave,’’ Ayinde said.

He said that he had sold his cars and some of his property to cater for the children. “After she had the fourth baby, I begged her to go for family planning, she refused. “I had to force her to the hospital for a family planning device but she went secretly to remove it without my consent.

The father of six also alleged that his wife was not washing his clothes and her children’s clothes. Ayinde pleaded with the court to dissolve the marriage so that the estranged wife would not continue to have more children.

Amazon Founder Jeff Bezos & Wife Divorce After 25 Years Of Marriage Blessed With 4 Children
Forget Him. Focus On Yourself And Your Children – Kate Halim Tells Married Women Living With Cheating Husbands