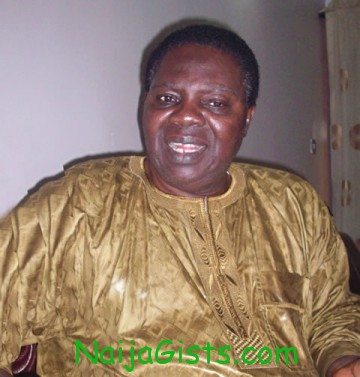 Last Sunday, yet another rumour had it that Ebenezer Obey had passed on. In this encounter with ADEOLA BALOGUN and ’NONYE BEN-NWANKWO, the music maestro expresses shock at the latest development naijagists.com

About the death rumours

There must be a fountain where all these rumours are coming from. The Holy Bible says that every good thing comes from God and every bad thing is from the devil. Honestly, I don’t know the evil people behind the terrible rumours about me. But I believe that the time has come for them to desist from all this nonsense. One interesting thing is that the more they spread evil rumours about me, the more God is doing good to me. When I had eye surgery, it was as if I was the only person in the world who ever did it. People were saying that Obey had gone blind, why? Even if somebody is blind, when has it become a crime?  But  I’m not blind. I can see that you are wearing a red shirt over a pair of light blue trousers, while my sister hasa  flowery blouse. A blind man cannot see all those things. And they continue to say their enemy is blind.  I’m not blind; I have an eye ailment, which anybody can have.  There are millions of people in the world with various eye ailments. Even at 70, a man that is 50 may not even look good as I do. I look at myself at the mirror and I know  I’m good looking and I know my God is making me more beautiful.

Immediately my wife went to be with the Lord, I was thinking of travelling abroad to go and have some rest. But whatever I want to do,  I’m always directed by the Holy Spirit, who told me to take it easy for a while. Some people went to town with the story that I was down; that the death of my wife had taken a toll on my health and that I had been flown out. Every year, I go for my normal check up for about 10 days. I just returned a few days ago.

My reaction to rumours of death

I flew in from America to honour my commitment to a few churches that I was supposed  to minister to on Sunday. I would have spent more time in America, but for the fact that I had committed myself to the programmes. I was not even in church. So I ministered in the morning in one of the churches. I was still at it when phone calls started coming in from people all over the world who wanted to know what happened. I didn’t hold my phone, though, as if I knew. At that time, I was sharing a testimony with the congregation at the programme, which was titled, Hand it over to God. I told them that people had spread terrible rumours about me many times. I told them to take a look at me, that I would be 70 very soon and despite the bad things that had been said about me, God had made me look good. That was what I was sharing with the congregation when I was informed about the rumour and the calls from concerned friends at home and abroad. I just smiled and said I was not surprised.

How such rumours affect me

It does not affect me personally, but it bothers my fans, admirers, and friends all over the world.  I don’t want my people to be troubled all the time. Spreading bad rumours about  other people is very bad and it must be stopped. It is evil.

I have never collapsed in my life. They say the death of my wife has affected my health. Really, if you have lived with a woman for about 48 years and she dies, you must feel her absence in your life. But I’m a child of God and I know what the Bible says. I know that I will go one day. So it is a journey and we are all sojourners here on earth and we must depart someday.

No, I can’t be absent from my church. Since my wife has gone to be with the Lord, I have been more in the church. The only time that I did not attend church service was the Sunday that I spent in America and when I was ministering in Ikorodu. I’m always around.

No, I don’t believe in that; I only believe in what the Bible says. They should stop that nonsense. The God who brought us here on earth has a date for us to start our journey and the day to end the journey is so also in His hand. Death will come when it will come and it is only God who knows when. Nobody should be afraid of death, it will come when it comes. Even those people spreading these rumours will die one day. Any little thing about Obey is exaggerated, as if it has never happened to anybody else before. I’m giving thanks to God Almighty that has been so merciful and faithful. Before my wife went to be with the Lord, she had started preparing for my 70th birthday and had started telling people and how the arrangement would be without me knowing. So when she died, I said I was not going to celebrate the birthday; that I would just do a very quiet thanksgiving, but people said no, I should not do that. They said 70th birthday is a landmark in the life of man. A friend of mine said to me, ‘Commander, it is the wish of your wife that it should be celebrated.’ And I agreed with him. Now, people are running round for the big celebration. By the special grace of God, come April 3rd, that is my birthday, plans will be out on  how to go about it. Maybe those people spreading rumours about my death want to see me. I just want to say that God has been good to me and all the bad things they have been saying, God has not allowed anyone to happen to me. (Credit: punch)