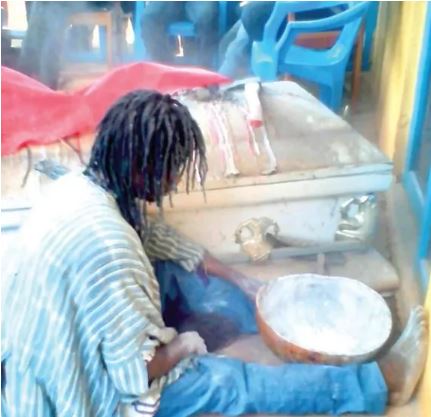 December 5, 2016 – Lagos Trader Who Slept In A Coffin For 2 Days In Search Of Wealth Recounts Encounter With Spiritualists In Kogi State

True confession of a Trader at the popular Ladipo spare Market in Lagos.

“I was ravaged by poverty, but I broke out of the desire to do money rituals. I’m from Aguleri in Anambra State. I have a very wealthy brother who was never willing to help family relations financially.

Today, he is a manager with one of the biggest oil firms in Nigeria. He has fleet of cars and multiple properties in Lagos, while I still struggle to pay my house rent in a one room apartment in a Lagos suburb where I share toilet with other tenants.

“I used to trade at the Ladipo Spare Parts Market in Lagos until my unrepentant lust for wealth pushed me into money rituals. I was linked with a female spiritualist in Igala, Kogi State.

I was told that after performing the needed rituals, I would instantly get rich. With that in my mind, I left for Igala. “When I got to Kogi State, I was directed to a lonely forest, where I saw other people seeking wealth like me. We were about six.

At the starting point of the rituals, we were told by the ritualist that anybody who concluded the rituals would be stupendously rich. I never knew God was out there to frustrate and teach me a bitter lesson of my life.

I went through the harrowing torture for nothing. For me, the ritualist gave me a shovel together with one other person. We were asked to dig a shallow grave, and we never had the premonition that after digging, we were going to be buried alive for three days.

“When we finished, the ritualist and some of his workers brought two caskets and asked us to go into it. He said we would sleep in the caskets for three days to get rich.

I was very scared but my lust for riches dismissed that initial fear and I entered the casket. It was indeed a terrible experience. “I didn’t know what really happened but I discovered that when the casket was unearthed and we were brought out, the other person that went into the casket same time with me had died.

I was told that we had spent just two, out of the mandatory three days, buried alive. It was at this point that I realised that I would have also been dead if the coffin had remained buried for three days.

“After this encounter with death, the much clamoured wealth didn’t come as I continued battling for my survival. I was as good as dead. Until date, there is nothing to show for the deadly money rituals, but I know that the hand of God was in what happened to me.

I have been living from hand to mouth, surviving with the help of my closes, friends who regularly give me food. “After all that I did, the wealth didn’t come and that was when I was badly hit by poverty.

This happened 14 years ago, and I am yet to get over the harrowing experience. This haunted me badly. But I thank God for the salvation of my soul as I am now a born again Christian. Yet I am nowhere near who can be called a rich man and presently.

I believe God strongly for His mercies on my life. I give God the glory that I didn’t die like my ritualist colleague in the forest of Kogi State

Nigerian Actress Ashabi Dies Of Stroke & Asthma 2 Years After Colleagues Abandoned Her
Soyinka Moves Foundation From US, Calls Nigerians Illiterates For Abusing Him Over Green Card