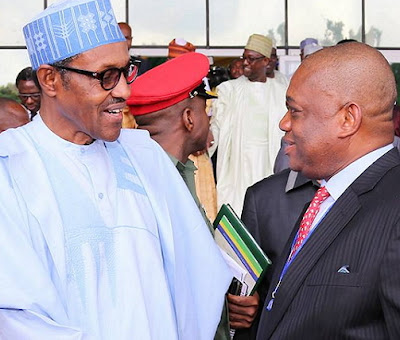 Ex-Governor of Abia State, Dr Orji Uzor Kalu has declared that the South East will vote massively for Buhari in 2019.

In a special interview on Arise TV in Abuja on Thursday, Kalu said he joined the ruling party because he loves Buhari’s personality. He further state that it would be unwise for any Igbo not to challenge Buhari in 2019.

Kalu noted that 2023 would be the best year for the Igbo to contest for Presidential election.

“I don’t think it is the right thing to do. I believe in equity and justice. We should allow the North to have its eight years.”

Kalu also explained why he joined the APC.

“I will add a lot of value to the APC in the South East. Buhari’s illness slowed him down, no doubt, but he has done well so far. I have been in the opposition for 10 years now. I joined Progressive Peoples Alliance (PPA) in 2006.

“But, I joined APC because of Buhari. I joined because of his integrity, so as to help grow the party in the South East. APC has come to stay in the South East. Buhari contesting in 2019 is not only for himself but also, for the South East. After Buhari’s eight years, nobody in Nigeria can tell us that our region cannot produce the president. Majority of the Igbo people will massively support Buhari in 2019. They did not support him in 2015. But, in 2019, they will massively vote for him. I am passing a vote of confidence in him because he has integrity.

“I am not the only one passing a vote of confidence in Buhari, the APC governors just endorsed him for a second term, the World Bank is supporting what he is doing, so also is the Eurpoean Union, including other powerful world leaders.”

Asked if he was sure Buhari would run in 2019, Kalu again answered:

“Recall what I said when he travelled to London for medical care, when some people said he would not return. I said he would not only return but will return healthier and stronger and that he is going to run in 2019. So, I am convinced and I am sure that Mr. President will run. I have not seen any other candidate than Buhari. I am not thinking of any other candidate. I joined the APC because of Buhari. I know him personally. The country needs him to complete his tenure.”

The business mogul also said as a region, the South East would be more interested in infrastructural development than the office of the Secretary to the Government of the Federation (SGF), where the holder of such office may not even be able to influence anything in the region.

“We just left the office. We had one during Jonathan, for six years. So, we can’t dictate to the president who he should appoint as his personal aides. But, even at that, we don’t need to have SGF to get what is due to us as a region. After all, up till last year, Port-Harcourt Expressway was impassable; today, major construction is going on there.

“Enugu-Onitsha Road, which was abandoned before Buhari came in, work is going on there now. For me, those things are important than a ministerial appointment or the office of the SGF. SGF is nothing. If Buhari can do our roads to jumpstart economic activities in our region, I will be very satisfied with that than having SGF who does not have power to do anything. This is why I believe that getting Buhari to do our roads is very important, rather than giving someone a ministerial appointment or SGF, which serves the personal interest of the appointee. We are traders, we are business people. All we need are access roads.

“We held the position for six years; I don’t see anything special in it. Our people are more interested in getting the roads fixed than holding appointments. Who told you that if an Igbo man is appointed SGF, he will exert much influence to get those roads fixed? The APC has not zoned the position to the South East. It is not true.”