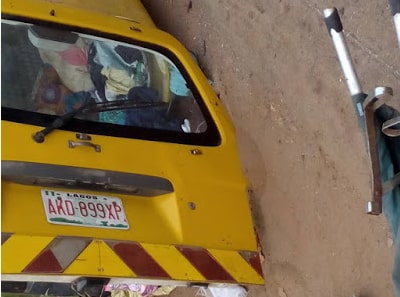 3 were confirmed dead while five others sustained injuries in an accident involving a Toyota Sienna and Toyota Previea at J3 Junction, Ogbere on Ijebu Ode/Benin Expressway.

Mr Babatunde Akinbiyi, Spokesman for Traffic Compliance and Enforcement Corps (TRACE) in Ogun, confirmed the incident to the News Agency of Nigeria (NAN) on Wednesday in Abeokuta.

Akinbiyi said that the accident, which occurred at about 9:33 a.m on Wednesday, was caused by dangerous driving.

“We learnt that a Preavia bus marked XD 871 KEY coming from Benin and a Sienna with registration number BDG 48 XX coming from Ijebu-Ode were involved in an accident.

“There were nine passengers in the Previea and six in the Sienna, both were commercial vehicles

“The accident was caused by the driver of the Sienna, in an attempt to make a u-turn, skidded off his lane and rammed into the on coming Previea.

“The accident claimed the lives of three passengers in the Sienna on the spot.

Akinbiyi said that the injured victims were taken to Ise Oluwa Clinic in Ogbere, while the corpses of the dead were deposited at the morgue in Ijebu Ode General Hospital.