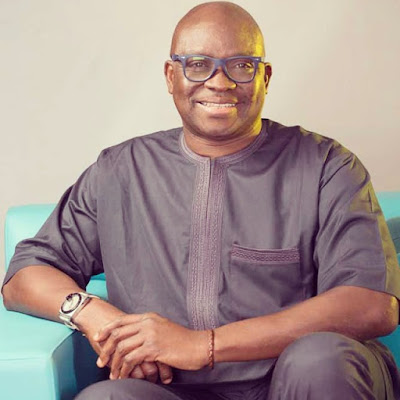 May 3, 2016 – Buhari Is My Grandfather – Fayose Tells Nigerian Journalists In Ibadan

Governor Ayodele Fayose of Ekiti state today described President Muhammadu Buhari as “my grandfather, “saying it is improper for him to abuse the President as widely claimed.

But the governor maintained that “being his grandfather” does not mean he would not criticise him when going in the wrong direction.

Fayose, who was a Guest Speaker at the Nigeria Union of Journalists (NUJ) World Press Freedom Day lecture held on Tuesday in Ibadan, Oyo State, said he would rather die than concealing the truth.

Speaking on the topic “Journalism and Politics : Two Sides of A Coin,” the controversial governor said there were two things that people were afraid of, that is they were afraid to die and were also afraid to be locked away.

Fayose said his criticism of President Buhari is healthy for Nigeria and the people of the country to achieve economic and political development.

According to him, it would be absurd for all to watch and refused to talk even when the ship of the nation is drifting away dangerously to perdition.

Citing the illegal arrest and detention of some Nigerians by agents of the federal government without any evidence of criminal charges, he stated that it was against the rights of any citizen to be detained for several weeks without any proof.

While insisting that his unrelenting criticism of President Buhari was not due to bitterness or hatred, the guest speaker said “I don’t abuse Buhari because he is my grandfather. But we all must not sleep and face the same direction in this country. The people voted for him because they wanted change and I agreed with that because we really needed change.

“In the last 12 months, Nigerians have never had it so bad. Most generators have been exhausted.”