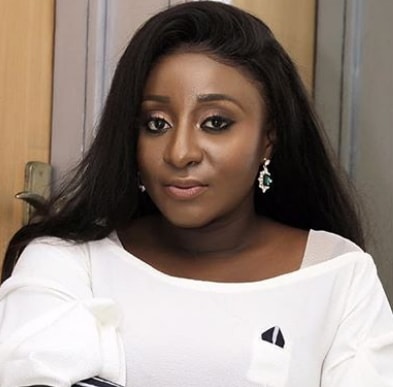 Ini Edo: Uche Jombo Is My Personal Friend, She Is One Of The Best Female Nollywood Producers

Here is what Ini Edo said on why she agreed to co-produce Heaven on my mind movie with Uche Jombo in a joint promotional interview they both had with Dupe Ayinla Olasunkanmi.

What made you decide to be part of the movie?

When I got the script, what really caught my attention was the fact that there was so much to be learnt from it. The story is actually one that a lot of people can relate with and that is the beauty of telling a story; being able to communicate and get across to the audience.

This is a life experience. The movie is quite funny when you go to watch it after it is been released to the cinemas, but behind the hilarious part, there is something that someone has experience in life. For me it is exciting when I read scripts that have to do with life experiences and capture it in a way that will make people laugh, but also learn from it.

What makes this different from your other roles?

This character is quite different. It is not like I haven’t played such before, but in a way it is special and unique. This character happens to be a Benin princess, who did not believe that some people can come from a home where they do not have it all. It is actually an interesting character and I enjoyed playing it.

What do you look out for when accepting roles?

I am someone who loves to put in all when displaying my character. So when I get to receive a script, and given a role, I look for one that is challenging and different from the ones I have played in the past.

I love roles that look almost impossible to play, I would say difficult roles. I look at roles that are out of my comfort zone that will give me the chance to squeeze myself and ask myself questions after delivering.

The movie ‘Heaven on my Mind’ is a joint effort, tell us about it?

It is a collaboration with Uche Jombo. Aside that she is a personal friend of mine, she is also someone that I have a lot of admiration for in terms of her work. The quality of work she does, tells how passionate she is on her works and also delivering the best to her audience.

Also, the consistence over the years is also something that is quiet commendable. So, it was quite fun seeing her directorial debut. For me, it was exciting and interesting watching her do it. I never had doubt that she could do it, because I know how powerful and passionate she can be in what she does.

It was not like I was expecting less, because she is someone I have known for quite a while and I know how controlling she can be in powering and managing things. Her professionalism and commitment were seen in her action.

Did you have an argument while working?

You know because we were together on the team, it was not all about who made the decision, but what we felt was best for the production and cast.

Yes we always argue, but it is for the best of what we both believe in and it is not about personal opinion. But at the end of the day, we always have been able to find a common ground.

What are your expectations on this collaboration?

I am expecting great reviews. People have been able to relate with the movie and say things like ‘yes, I know someone who had gone through that’. I expect people to be very amused and learn from it and open more directorial jobs for Uche.

Are we expecting to see new faces in the movie?

Yes, the lead actor happens to be a new face. He has done some works, but this is about the biggest major job he has done and expects to give him the official announcement to say.

Why him and not a prominent face?

I was on a job with him, and I saw the potential in him. When I read the script, I told Uche I had the perfect actor for the role and he was asked to come for the audition. He has the look and the delivery; he has the command of English and deceptive look for the role.

Because I like to have new people on my production, I have always done that with most of my productions, so I felt he was new and fits into the character.