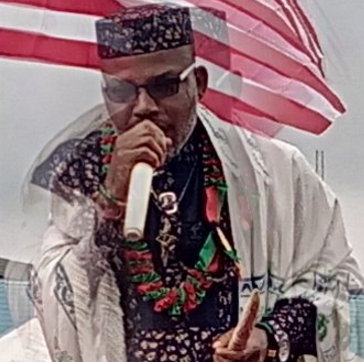 August 27, 2017 – IPOB’s Nnamdi Kanu Dares Buhari Says Anybody Who Tries To Arrest Him Will Die, Threatens To Crumble Nigeria

IPOB’s Nnamdi Kanu Calls Aba The Spiritual Land Of Biafra, Says Anyone Who Tries To Arrest Him Will Die

Radio Biafra Director, IPOB Leader Mazi Nnamdi Kanu has dared the federal government over attempts to re-arrest him, vowing that anyone who attempts to arrest him would be crushed.

Kanu stated this on Sunday at Boys Technical College (BTC) located along Fau lks road in Aba North Local Government of Abia State where members of IPOB Faulks road Zone I and over 20, 000 supporters of the group received him.

The IPOB leader who described Aba as the “Spiritual Land of Biafra”, said that he was not going to go on exile, urging his supporters and those who believed in the Biafra course to be strong and resolute.

He also used the opportunity to reiterate that there won’t be election in Anambra in November or any part of “Biafra Land” even in 2019 unless there was a date for referendum which the group has been clamouring for. 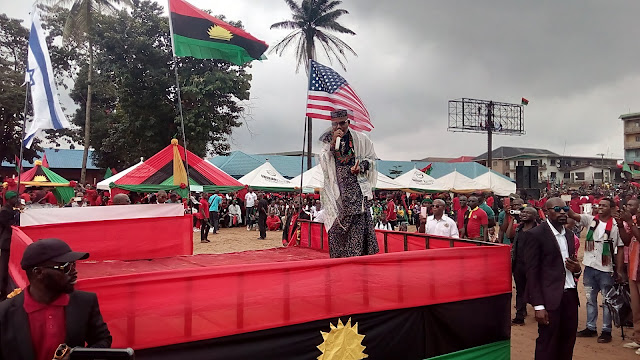 Kanu who paid tribute to those reportedly killed at National High School Aba by security agencies in his words said “Here we are, is Biafra Land. Aba is the spiritual capital of Biafra land. We started in Aba in 2015 at CKC (Christ the King Catholic Cathedral). That day, heaven authenticated our move that IPOB will restore Biafra and that’s what we’ve come to do. We died in Aba; At National High School.

“They shot and killed us in other places in Biafra land when they were protesting for my release. As our people rest in the grave, we’ll never rest until Biafra is restored. I don’t care what they say in Abuja. I don’t give a damn what they say in Lagos.

“I’m a Biafran and we are going to crumble the zoo. Some idiots who are not educated said that they’ll arrest me, and I ask them to come. I’m in Biafra land. If any of them leaves Biafra land alive know that this is not IPOB. Tell them that’s what I said.

“Tell buhari that I’m in Aba and any person who comes to arrest Nnamdi Kanu in Biafra land will die here. I’ll never go on exile I assure you.

“Forget all the nonsense they write about us. We are not slowing down and no man born of a woman can stop us. They thought we are joking and God gave us a simple message that no one can stop us. The movement to restore Biafra is unstoppable.

“God sent me to you, Aba people and I am giving you His message. Our veterans here, your own message is that you’ll see Biafra alive not in death.

“The message of heaven is what I bring to you. Don’t be afraid. The plans of our enemies are not going to be actualized. The enemies are planning, but we are formidable.

“We are going to boycott Anambra State election. After Anambra 2017, in 2019, there’ll be no elections in Biafra land. Signed and sealed. My message is that there ‘ll not be election in Biafra land ever again until they give us date for referendum.”

Some of IPOB members who spoke to reporters at the venue said that they defied going to church to come and listen to their leader and a man that God has destined to use to liberate the people of the southeast and old eastern region from the hands of corrupt and insensitive leaders who have over the years decided to impoverish than make life meaningful for their subjects.

They however vowed to join hands with Kanu to ensure that Biafra was realized no matter how long it would take.