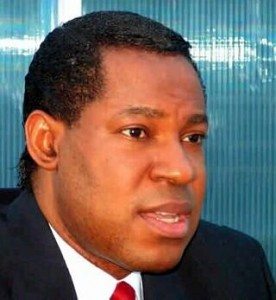 Just like the proverbial lamp that cannot shine its light on its base, Pastor Chris Oyakhilome who prides himself as a miracle worker under whose supposed angelic voice every evil trembles, but may yet find one evil that has consistently defied the magic utterances of the mulatto clergy. naijagists.com

Lately, the works of his profligate minions who help him to run his strings of media businesses in Nigeria were put into review. Barely a year after Mobola Lanre-Badmus, the former editor-in-chief of National Standard Magazine, was forced to step down, her successor, Sylvester Ebodaghe, is singing the same song that get Mobola the kick. This means Sylvester is, like his predecessor, done with the three-year funds injected by the miracle pastor to keep the magazine dream afloat.

Investigation reveals the magazine is yet to appear on the newsstand this year despite getting a dash of US $100,000 from Pastor Chris at the last IPPC conference purportedly for being an outstanding organ whereas the staffers are being owed arrears of salaries ranging from between five to seven months.

That the magazine is swimming in troubled waters became obvious last year when it could only come out with eight editions despite transforming to a monthly publication from its usual weekly status under the last management and has not come out with any publication this year. Sources within the ministry of the man popularly called Pastor Chris are, however, not surprised that Sylvester Ebodaghe could be broke soon since according to them, he had just bought a N25 million duplex in Omole area in addition to hosting the cream of the society to a lavish carnival of a wedding in Benin last February which was estimated to have gulped nothing less than N40 million.

The incident it was gathered is giving the pastor sleepless nights coming on the heels of the way another of his establishment, Infinity TV under Tony Ikeokwu was run aground. Tony it was who ran amuck with the several millions meant to keep in operation Infinity TV, a satellite media business of Pastor Chris.

The current trend of crisis facing Pastor Chris’ business may be traced to his business foray into South Africa, where he relocated a couple of years back leaving his Nigerian headquarters in the hands of his brothers and some other pastors; the risk must have adversely affected his in-flow of money which comes from tithes and questionable donations from his followers in Nigeria who in his absence choose not to continue in such manner.

It would be recalled that the quest to see the once very visible pastor by his Nigerian congregation was responsible for them accepting to pay to attend the cross-over night some years back and his absence can be said to be the reason his Rhapsody of Realities devotional pamphlet may have suddenly disappeared from the counters in banks. Many were of the belief that the devotional produced by the pastor and his wife are free due to its availabilities whereas it is being purchased by members of the church for free distribution and placement in banks and other of such places.

The fear of the scandal that may follow if Pastor Chris decided to deal with those who misappropriate money pumped into the investments is, however, said to be the reason he is not taking any serious action against them, while Sylvester’s warm relationship with Pastor Anita Oyakhilome, wife of the miracle pastor, as well as other influential women said to be close to the man’s heart is also said to be working for him.

Aside all these, the flamboyant pastor is also said to be owing his other staff some months’ salaries and recently the workers who are working in his orphanage home sometimes protested over unpaid salaries while his Rhapsody is not visible on the streets as it used to be before.

Though success has eluded him in the print media, Oyakhilome has breathed life into the television arm of Minaj Broadcasting International, established in the 1990s by Senator Mike Ajeigbo.

For years, the television station was on its knees, as unpaid salaries sent staff on job hunts in other stations and fields. Equipment went bad and, expectedly, transmission occurred fleetingly. The few remaining staff hoped for, rather than expected, a cure to the station’s ailment. Then in 2006, Oyakhilome, sources said, arrived the scene with a huge dose of cash injection. The result has been remarkable. Minaj, once one of the wastelands of the broadcast media, snatched personnel from more illustrious competitors like Channels Television and Silverbird Television. Transmission resumed and has remained vibrant since.

The preacher’s interests in the print and electronic media are hardly surprising. His image in the media, particularly in print, is less than gleaming. Since he joined the ranks of Nigerian superstar preachers, Oyakhilome has been a favourite subject of scandal-hunting celebrity journals. His interest in television may also not be unconnected with the ban on the broadcast of unverified miracles by the National Broadcasting Commission, NBC, in 2004.

Up till then, Oyakhilome’s Atmosphere of Miracles ran seven days a week, on about 20 TV stations. The ban, however, did not stop Oyakhilome from keeping his slots on the air, replacing the ATM with Teaching Programme and LoveWorld. The ATM also continued to run twice a week on Ghana’s Metro TV and throughout the week on LoveWorld Christian Network, a satellite channel owned by Oyakhilome. It also runs on TBN in South Africa. While Minaj remains a work in progress, Oyakhilome’s business nous has been confirmed in other areas. An Architecture graduate of the Ambrose Alli University formerly Bendel State University Oyakhilome has built one of the nation’s most virile religious brands from his name, looks and followers’ adulation.

His name moves merchandise in a way similar to how English soccer star, David Beckham’s does. These items include books, video tapes of his crusades and miracles, audio tapes, CDs, VCDs and DVDs of his teachings. All these are sold at Christ Embassy’s satellite churches and other outlets for Christian materials in Nigeria and abroad. They can also be bought on-line, via his ministry’s on-line store. On the store, prices of DVDs range between £12 and £25 in the UK and Ireland, while they cost between N600 and N3,600 in Nigeria. Audio tapes attract between N450 and N1,800 in Nigeria and $15 and $90 in the United States. For books, prices range between N200 and N3,200 locally; and $3.50 and $32 in the US. All are written by Oyakhilome and Anita, his wife, who heads the church’s operations in the United Kingdom and is director of the church’s international operations.

By far, the hottest item on the list of Oyakhilome’s products is Rhapsody of Realities that is fading out of circulation gradually, a bimonthly devotional guide. The book, which is currently published in 46 local and foreign languages, also has a children’s version. For Oyakhilome’s followers around the world, it is a companion to the Bible and an emblem of faith. In Nigeria, it costs N150. Abroad, it is $2. The preacher’s messages are also received on pocket personal computers, mobile phones and palmtops. They could also be downloaded on MP3.

Oyakhilome’s talents as a pastor, speaker and author have been well harnessed to give him, his wife, Anita, and two children a Hollywood lifestyle. On Lagos’ Kudirat Abiola Way, where his church is located, his convoy of gleaming autos is a fixture. He also dresses elegantly like a tycoon.

His immodest means have ensured that his ministry’s growth has been exponential, as evidenced by the sprouting of Christ Embassy satellite churches all over Nigeria and the world.

The headquarters of the church, once a sprawling inelegant structure, can now compare and compete with the headquarter of a second generation bank on Island.(the global)