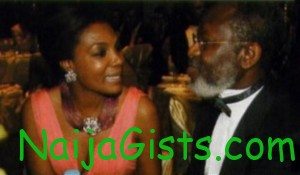 According to Global News, the plotting and counter plotting of this case would make it the best movie of the year if it were later turned a movie. It started ordinarily as a divorce suit and later graduated to bigamy but as it stands now Mr. Tunde Soleye will do anything to settle out of court with his wife of many years Funmilayo. naijagists.com

It all began when the doctor of Duro Soleye Hospital fame decided to marry ex-beauty queen Nike Oshinowo and instituted divorce proceedings against his first wife Funmilayo. The wife was said to have turned things by withdrawing from the initial divorce case and instead filing for bigamy. She joined Nike in the suit and asked her to pay N10 million for daring to marry her husband. The case which was moved from the Ikeja High Court to Lagos High Court has been on for many years now and recently the woman has even reverted to divorce but is asking the court to share all the family properties between them equally.

Those in the know revealed that the woman is hell-bent on sharing the hospital into two being a medical doctor herself; she was said to have contributed to the growth of the hospital and may have decided that rather for another woman to enjoy her sweat she will take what is hers out of the wedding. This decision it was, gathered jolted Tunde who has been appealing for an out-of-court settlement with the wife and mother of his grown-up children.

Mrs. Soleye in suit N0 LD/280WD/07, filed at Lagos High Court, Igbosere, Lagos Island, alleged that these illicit relationships between her husband and these women have caused her a lot of embarrassment, humiliation and emotional distress. In her words “Since the marriage, he has unscrupulously breached his marital vows and frequently committed adultery in the most scandalous manner with at least seven women.Three of these affairs produced three sons.

She added that she tolerated the affairs because of the emotional stability of the children of the marriage and in the hope that her husband would men his ways. But his affair with Nike Oshinowo was what gave her the impression that her husband was beyond redemption. It was then she asked for a divorce. Her husband refused to grant her divorce, instead he brought a nuptial agreement prepared by his lawyer to be signed by her, Nike and himself. She said she refused to sign the agreement and despite her advise against her husband marrying Nike, and if he must marry her, he must divorce her first, he still went ahead to do the introduction in January 2007.

Dr. Funmilayo alleged in her petition that while her husband was cavorting with his numerous mistresses, he completely and willfully abandoned his conjugal responsibilities for 10 years, despite the fact that they lived together under the same roof.

Now, because of all these allegations, she’s asking the court to dissolve her marriage which was contracted in 1979 and produced 3 children. She’s also asking for a lump sum of 250, 000 pounds and N75 million respectively. She wants the court to order her husband to give her the title documents of the property Mews, London. A flat at Gray’s Inn rd for their first daughter. For her son, she wants the court to order her husband to pay a total sum of $276, 000 for his university education and maintenance. And more money to their second daughter. She also wants Nike Oshinowo to pay her N10million as damages for marrying her husband despite knowing full well that he was still married.

Dr Tunde Soleye in response to his wife’s allegations of adultery, admitted having affairs with some of the women mentioned by his wife, but said it was at a time when the relationship between him and his wife had ended. He argued that at the time, it was his wife herself who stated that she would no longer sleep with him and he was therefore free to sleep with other women. He confirmed asking his wife to sign a tripartite nuptial agreement between himself and Nike Oshinowo but denied telling anybody that he intended having any wedding at all with Ms Oshinowo. He said what he told his wife was that he was going to be introduced to Ms Oshinowo’s family and that he intended marrying her after their divorce. He denied that any introduction carried out by him to Oshinowo’s family amount to a customary marriage. (So they are not married?) While admitting being very close to Nike, he denied even having any sexual intimacy with her. Therefore as far as he was concerned, he had no committed any adultery with her as being alleged by his wife.

He agreed with his wife that he had not performed his conjugal responsibilities towards her for a very long time (according to him, 20 years) but denied deliberately doing that. According to him, it was his wife who had willfully refused him despite several attempts and demands from him. He said for this reason and the fact that he had not lived under the same roof with her since 1998, he also wants the marriage dissolved. He said that aside other reliefs that the court may grant, he is willing to give her the sum of N30m to enable her buy a residential property in Lagos and another N20m payment. he also said since all the children from the marriage were adults, there was no need to make any arrangement for them in the divorce settlement…(Global Mag)

Continue Reading
You may also like...
Related Topics:divorce, Soleye, Tunde