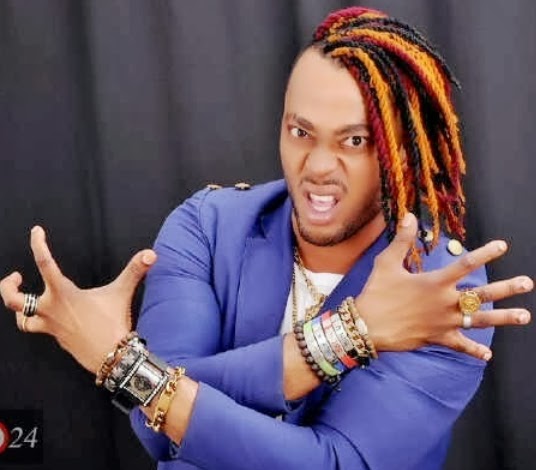 Controversial Nollywood actor Benson Okonkwo who got into trouble for calling a lady his girlfriend few months ago has finally broken his silence over the gay rumour that trailed him when the lady tagged him a gay man.

In a new interview he granted Vanguard, Benson Okonkwo said Nigerians are calling him gay because of his roles in movies.

“You know one thing with Nigerians, when you play a role and play it well that’s what you are.  I have done three gay movies, and I starred in a gay movie titled ‘One dollar’, I incurred the wrath of many movie fans. At the time, my critics were asking questions about my sexuality in real life.

Unperturbed by the outrage, I also appeared in another gay movie ‘Pregnant Hawker’ and ‘The Strippers.’

But, I have 50 movies to my credit, I am unhappy about the negative reactions that trailed my decision to star in those movies. I insist that the public is ignorant of the fact that actions in movies are not real. Although these movies sparked off controversy about my sexuality, I make bold to say that Nigerians are hypocrites.

Although I have acted as a homosexual three times, I am afraid of being tagged a stereotyped actor. Despite the fact that the gay controversy has brought me fame, I want people to remember that I have not starred in only gay or adult films. Contrary to what some persons think, I have never been sexually harassed by homosexuals. I am not a homosexual.

Notwithstanding the negative comments, it took much willpower to get into character. It was hard for me to accept the role at first, and it took a lot of convincing and support from the director before I could play the role.

The ‘pay was right,’ I enjoy the support of my loved ones in spite of the criticism. “My family understands that I am only acting and the roles have nothing to do with my personal life or character, that’s why they stood by me and continue to stand by me. I believe that versatility is one thing any actor must possess, that way, he or she stands out.

When asked about his relationship, the actor said he has decided to keep it private for now.